A little while back, a group of road warriors banded together, as they do every month, for the YIP (Young Involved Philadelphia) Running Club. The only difference that month: I joined them. That’s right, this  self-proclaimed “non-runner” decided to lace up her sneakers and sweat-wicking tank top and bring new meaning to “fast-casual”.  Lured by the guarantee of wholesome treats and an insider’s look at Honeygrow HQ, 20 of us knocked out 3.5 miles from Center City to Fishtown before reaching the Promised Land at Front and Oxford.

YIP, an organization full of civically minded young professionals in the City of Brotherly Love, puts together these 2-5 mile runs every month. Each run begins at Philadelphia Runner’s Center City location and ends at an interesting spot in the city where the gang can explore and mingle with some new and like-minded Philadelphians. It’s no coincidence that I chose September as my first running club. What can I say? I’m a sucker for post-run snacks, especially if they’re from Philly’s own Honeygrow. 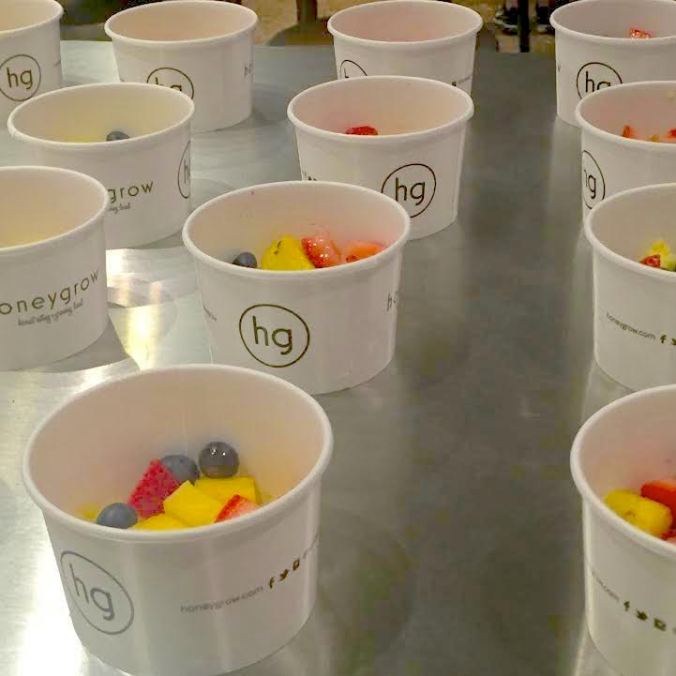 See, Honeygrow.and I, we go way back. Or, at least 4 years back. In June of 2012, Justin Rosenberg, the founder of Honeygrow, opened his first location at 16th and Sansom. And a few months later, I moved to town, following the migration patterns of approximately 100,000 other 20-34 year olds since 2006 seeking an urban center teeming with creativity and potential. Justin, who chatted with us briefly when we arrived, explained that despite a rocky first few months, the idea soon caught fire.

Like many health-conscious millennials, I chose Philly for the affordable rent, thriving job market, and, of course, the 24/7 accessibility to soft pretzels. The idea of an affordable, healthy, and customizable fast-casual dining experience is appealing to the young professional – none more so than Philadelphia’s own Honeygrow. Honestly, I don’t know a 20-something in the city that hasn’t waited, salivating, for their stir-fry or salad at one of Honeygrow’s Philadelphia locations. From my own experience as a graduate student at Penn and a frequenter of many of Center City’s boutique fitness studios, their West Philly and Rittenhouse locations have saved me from mid-study session starvation or post-sweat stove-top slumming more times than I can count.

Speaking of which, we only could explore Honeygrow’s inner sanctum for so long before our stomachs began to rumble. Luckily, the team had us covered and quickly doled out their signature Honeybars and something a bit more savory. In between shoveling stir fry into our mouths, we were able to have a revealing Q&A with David Katz, the culinary director and palate powerhouse of Honeygrow. He spoke to the focus on regional styles and recipe popularity, Honeygrow’s plans for expansion over the next year (spoiler alert: it’s gonna be fast & furious, with over 15 locations by 2017) and, of course, how his Jersey Shore and Philly roots influenced the menu.

Love this message right in the heart of their HQ!

In a swirling sea of fast-casual options, Honeygrow stands out for the hungry and healthy, who are often in a hurry. Their founder, a former financial analyst himself, knows the grind well, and saw opportunity in Philly like so many of us did . We’ve got some of the most passionate eaters around and, with YIP being just one of DOZENS of run clubs, I can almost guarantee there’s always going to be someone down to carbo load.

ALSO, Honeygrow’s new hgAthletics program has opportunities for fitness of all kinds. From testing out PLUSgives new yoga mats

…to a BOOtcamp with an Olympian, check out the hgAthletics Facebook page to stay in the know and get involved!

I’m a GOLD RUSH. Get it? Don’t worry, no one else did, either. (Photo cred to Kyle Huff, Honeygrow’s social media master)

Check out Honeygrow’s monthly run club if you wanna get in on the “dash & dine” action on the fourth Tuesday of every month. After your 3-5 mile run, you’ll get 25% off your Honeygrow order! How’s that for instant gratification?

ALSO, word on the street is that the next hgAthletics event is going feature a partnership with PLUSgives AND Reading Terminal Market. Stay tuned!

(Pro tip: Scroll to the bottom for a discount code to get a bouquet for $20 with free delivery!)

There are plenty of things to worry about in Philadelphia these days:

But there’s one thing you don’t have to worry about: doling out flowers to friends/loved ones at a moment’s notice!

We’re all busy bees. From work to play, dating to dining, school to spinning, it’s easy to forget things. Birthdays, anniversaries, you know… the kinds of things that make us depend on Facebook reminders. Enter: UrbanStems.

Your friends in D.C. and New York have been sending stems for a year or two now, but with their Philadelphia and Baltimore launch, UrbanStems is growing like a weed. Luckily, their bouquets are a little nicer than anything you’d pick from your backyard.

From seasonal shades to surprise succulents, I love that UrbanStems isn’t just jamming baby’s breath around some carnations and a rose or two, tossing it all into a fish bowl and charging $65 to deliver in the city. In fact, their system is pretty awesome.

This convenient little box is hand-delivered by a super-friendly courier, complete with a hand-written note AND handles (that’s a lot of hand-iness, right?) They even send a photo to confirm your flowers made it to their destination! PLUS the convenient tote allowed my flowers to make it home safely (and easily) on a city bus!

The little tote also had a pull tab which, when yanked, pushed the bouquet out as if the petals were opening up!

I verify, no “fluffing” up took place. This is exactly how my bouquet looked when I pulled it out of the tote!

They switch up the bouquets all the time, so your flowers are always going to be different. AND, you don’t have to be a big-time baller to deliver your daisies (or mums, or rosehips, or whatever is in this season!)

Bouquets start at a mere $35 with free delivery within a few hours (or you can schedule in advance, if you’re a planner).

BUT since I’m a little obsessed with UrbanStems, they gave me a discount code to share getting you $15 off your first bouquet! 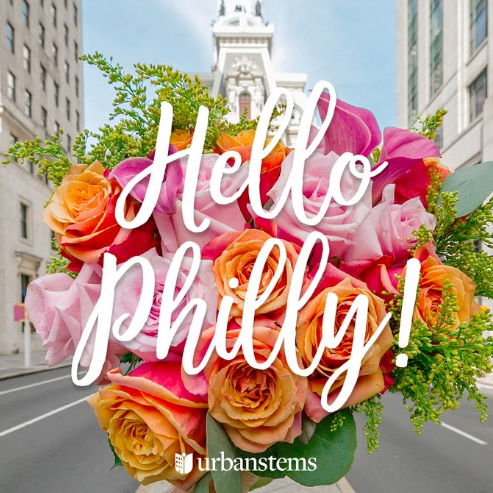 Just type inaTFpYg as your “Referral Code” when you sign up on UrbanStems’ site and you can get a killer bouquet to your bae (or mom) for $20! You probably spent that on cold brew in the last week, anyway. So make some at home, and #SendHappy (and then tell me how it went!)