Wise words by my buddy and hostess for the weekend, Caitlin:

Just so you know, you won’t lose weight in Chicago.

Wise words, indeed.  I tried caviar for the first time, enjoyed a deep dish pizza (albeit a 6″ one), and had a duck confit taco!

Chicago was a delicious city. Eamonn and Caitlin certainly kept me well fed, and I was able to enjoy some fantastic meals while on the trip.  Some of my favorites?

Accompanied by some of Cait and Eam’s local buddies, we hit up the aptly named Taco Joint for some tasty eats.  Little did we know we were in for such a treat!  This modestly priced spot was POPPIN’ and the line was out the door.  Apparently, this is the case with nearly all downtown Chicago restaurants so, for future reference, make a reservation!

Even with one, we had a little bit of a wait, but that was enjoyed with a few margaritas.  For me, a Zocalo margarita with Lunazul Blanco Tequila, triple sec, and fresh lime juice; served up on the rocks with a salt rim.  They also had a spicy margarita with a bite to it, which was also a crowd favorite.  After getting a round of guac for the table (including a roja guacamole: Avocado with roasted tomatoes, roasted onion and roasted red jalapeno salsa) served with tortilla chips and plantain chips, we ogled the taco menu.

So very many options!!

I decided on three:

This trio of tacos could not have delighted my senses more.  Requiring no additional salsa or toppings (though I could’ve obtained some if I’d asked), and served on small, handmade tortillas (that were green? yup.), I managed to enjoy each taco more than the last.  The fajita “taco of the night” was actually a little different from what I described (but that was the closest they had on the menu) and had some guacamole on it as well, but the queso blanco was creamy and flavorful and stole the show from the somewhat tough steak. That taco was tasty, but not my favorite.

The duck confit taco was my first time ever tasting duck (I know, right?!) I’ll admit, it was so juicy and the ancho chile salsa was the strongest flavor I got, so I couldn’t tell you off the bat if I’m a duck convert. I guess I’ll just have to go out and try more duck, eh?

The MVT(aco) was, without question, the Cochinita. The pulled pork was so tender that my mouth felt like the tortilla was giving the fillings a tight embrace as I took a bite.  The salsa was spicy and paired perfectly with possibly my favorite part of the taco: the pickled red onions.

When it comes to onions, I’m a huge fan, but I don’t know if I’ve ever tried them pickled. Well, after this experience (and a quick glance around the internet), I know that I want to try this Pickled Red Onion recipe from Umami girl POST-HASTE!  I want these in my tacos, on my eggs, or pulled straight out of the jar. They were pliant, yet still maintained a hint of crunch which I love about adding onions to dishes. Aromatic and diverse in flavor and texture, this taco was a rockstar, and I will judge all future tacos against it.

A latecomer to the meal was an alcoholic Horchata that I knew I wanted the moment I spotted it on the menu. Coming in at $10, this drink was actually more expensive than all the tacos combined (which were $3 each) but, in my opinion, if you have a chance to get horchata at a Mexican restaurant, you should do it.

If you have the chance to add booze to that horchata, DO IT!!

I don’t see the cocktail on the menu now, but I’m pretty sure that, added to the base of cinnamon rice milk, it contained a dark rum and Stoli Vanil. I could be making that up. It really doesn’t matter at this point. All that matters is the joy on my tongue as I drank it, and the sadness on my face when I finished it. 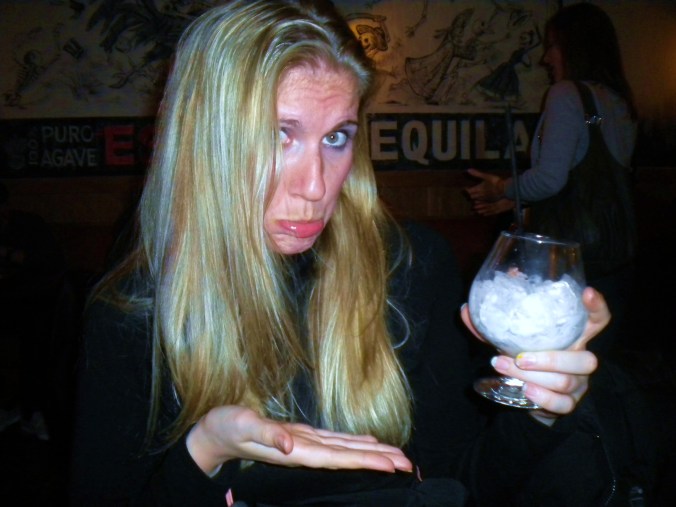 As you might be able to see, there was a little more ice than I normally like in my cocktails. Luckily, I had my handy wearable koozies on to keep me warm.

This meal was phenomenal, the atmosphere was exciting and social, and the horchata was one of the best I’ve ever had, boozy or not!  And to walk out paying less than $25 for a meal in the city that tastes fresh and doesn’t make you feel so stuffed you need to be rolled out… well that’s a success in my book.

Have you ever tried horchata (alcoholic or non)? If not, what’s your favorite Mexican beverage (sangria? margarita? tequila shots?)