I’m feeling those little tingles and jingles that I haven’t felt for 7 years. There is a change in the air, and it’s not just the pollen. I’m getting lost and spending far too much money on textbooks, and all of the sudden, I’m on the same level as the 2,500 17-19 year olds scampering around the campus of University of Pennsylvania… Where on EARTH is my Trapper Keeper?

Yup, I’ve found a new love and, though there’s a bit of an age difference (try 247 years… rob the cradle much?) I think we have a solid future ahead.

I spent yesterday doing typical first year things…. I panicked when I couldn’t get into a building, I stumbled over the uneven bricks, I took a campus tour, and I checked out some frat boys (totally platonic, I got my own frat boy at home). 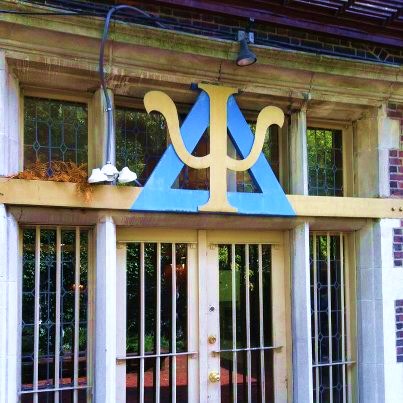 Delta Psi ’til I die

Visiting the UPenn chapter of my OWN fraternity (though, at UNC, it’s co-ed and basically 100% different from the UPenn chapter) brought back so many feelings of excitement and anticipation, feelings I never thought I’d have again after graduating from UNC.  And, of course, I picked up the standard amount of Swag for any new student to campus.

Praise be, this shirt’s free (other than that massive tuition bill I paid…)

Hell, I even got a LANYARD!

(Anyone else remember how attached they were to their first-year lanyard? And how devastated you were the first time you lost it/it broke? So many feelings…)

I’m too excited for words. There’s this feeling I get exploring my new home for the next few years… an electricity in the air, a general “anything can happen” vibe that fills the air. And even though I spent this morning shelling out some more bucks for textbooks (that’s one semesterly purchase I did NOT miss) and going over all the readings I have to do before classes even start (What happened to syllabus week being for parties and free foods?), nothing is going to bring me down.  I gotta get some notebooks, some highlighters, and a few reinforcers I’ll never use, and invest in a solid chunk of Lisa Frank goodies.  It’s back to school, baby, and this makes it official.

What is/was your favorite thing about going back to school?

14 thoughts on “Feels Like Falling for the First Time…”