Yes, the main reason I went to Boston was to be with my fraternity. But, when in Rome, right?

While I didn’t get a chance to visit Sam Adams or Night Shift, I did manage to worm my way over to Harpoon Brewery for their legendary 2pm tasting. Basically, folks show up to the bar, they describe the beers and, for one hour, carte blanche to drink all you care to drink. And, with so many options, it was hard to resist…. 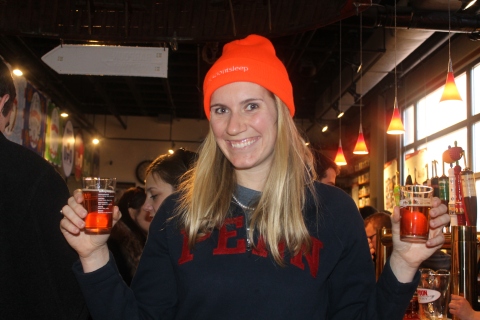 Don’t mind the lack of makeup. This was the first thing I did after a 7 hour bus ride.

Rich & Dan’s Rye IPA – Wow. Never expected to like this. What a great surprise.

Chocolate Stout (Though I can’t imagine drinking more than a little bit of that sweet stuff!)

Their Bourbon Barrel Aged Fig Porter was a little bit less flavorful than I expected, but I loved the concept. Maybe they’ll give it another try sometime.

Even more of a treat? Hanging with not one but TWO of my buddies from UNC!! Fiona (the tiny one on the right) was my roomie all weekend and Patty (the tinier one on the left) JUST SO HAPPENED to be visiting Boston for the weekend. Fancy meeting y’all here!

And, once we got a little silly off of tasty brews, the most essential part of the day happened. My ONLY real meal of the day, from the most-delicious Yankee Lobster for an infamous Lobster Roll.

I could eat seven of these. Easy peasy.

Such a harsh judge

Couldn’t get enough. The fries were crisp and well seasoned, but the lobster roll…. So meaty, still light (not too heavy on the mayo/sauce, which I can support), and the side of coleslaw was top notch.

If these lobster rolls weren’t a little steep in price (read: $18), I think I would’ve ONLY eaten them all weekend.

Alas, we had to get back to Cambridge and start partying….. Free tasting, insane lobster roll, cocktail parties…. tough life, right?

If you’re in Bean Town on a weekday, get thee to a tasting (2pm or 4pm). AND, if you’re there on a weekend, check out one of the tours! I didn’t have a chance to check it out, but I’ve heard only good things.

Also, if you’re trying to have a lobster roll party, please don’t hesitate to invite me.

4 thoughts on “Harpoon Brewery Tasting: Drink Up, and Welcome to Boston”