My last post was in mid-April. This, for me, is unheard of. Then again, I guess I never was in grad school before this year, and never juggling quite so many random things. Normally, when I come home from an evening of class, the last thing on my mind is blogging. And when I return after hours of Living Socially, I am too wiped to do anything but maybe sometimes just fall asleep immediately on my couch. Despite my bed being a mere 10 feet away.

Cheers to friends who will always creep on you when you’re sleeping.

All that aside, the past month has been jam-packed with so many papers, new opportunities (and not in the way that couples counseling tells you to call things you don’t like opportunities a la The Office, just really exciting ones), oodles of tasty foods, and definitely NOT enough working out.  When I wasn’t in class or sleeping or working, I was generally feeling that guilt that only comes with school. That whole “I should be doing work, not having fun at Zumba class!!” I recognize this is a load of bull. But that’s where my head was going. Dumb.

Luckily, it paid off with the grades looking pretty excellent. I started working a new internship for some field work hours. I obtained a part-time job at Penn which should help pay the bills. But really, that’s the boring stuff I’ve been doing. Let’s get to the good stuff.

There’s been cheese, and lots of it. Some things I’ve been learning:

We had our retreat for Living Socially. It was a blast (too much of a blast for some of us, cough cough). But real talk, if you ever wanna know how to throw a successful Beer Olympics, just let me know. I’ve got the deets.

Is that a dragon? NOPE IT’S JUST ME!!

Martha and I went to the Philadelphia Science Festival Kickoff Carnival. We dusted with fingerprinting kits, made our own lip balm, tried Yards’ Pythagorean Beerum (Bahahaha craft beer names are the best), blew smoke from a mixture of giant marshmallows and liquid nitrogen (see the above photo) and played with the biggest thing of silly putty I’ve ever seen.

I probably won. She’s just too little of a lady to fight THIS CHICK!

My “baby” brother Connor graduated from Penn State. I couldn’t be more proud.

Never not funny to see my tiny mother

It was incredible to be up in State College with ALL of my nuclear family. This like, NEVER happens. Things got a bit rowdy at times, but nothing a good family game of flip cup couldn’t resolve. 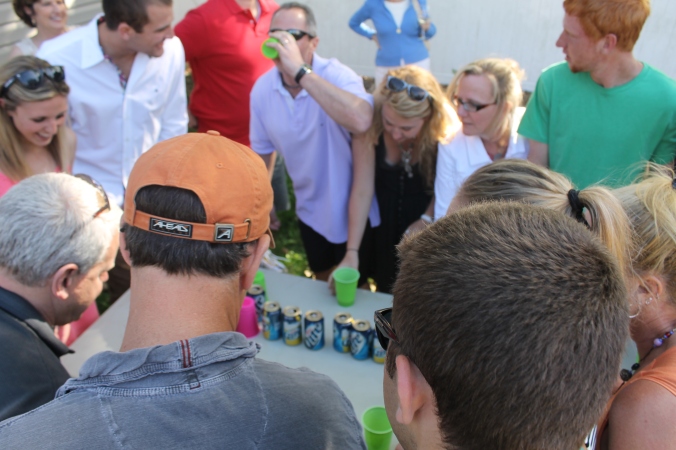 Well, now I have the next two weeks off from school before summer classes. My goals include: work as many hours as possible, be outside as much as possible, get to the shore at least once (cold weather be damned), try not to eat with quite as much reckless abandon as the last weekend (Penn State isn’t known for having tons of healthy options….), and not think about class at all.  Other than obsessively checking online to see if my grades are posted.

Whew. That was a mouthful (a handful? Since I was typing?)

What stops you from posting, whether it’s on a blog or Twitter or Facebook? School pretty much always gets me, although when I’m reading some quality novels, I have no interest in writing. It’s a thing.

What game would you rock at in the Beer Olympics?  I’ll give you a hint: mine was NOT Tour de Franzia.

8 thoughts on “What I’ve Been Doing Instead of Blogging”