I’ve got a bone to pick with whoever wrote that song about flying through the air with the greatest of ease. Maybe it’s just envy of the man on the flying trapeze…

I have no issues with heights. I thrive on adrenaline and love a new adventurous way of breaking a sweat. So when I was given a chance to try out  Mary Kelly Rayel’s Fly School Circus Arts in Northern Liberties, Philadelphia, I figured I’d grab life by the…well, the bar.

If you’re yearning for a way to kiss the sky WITHOUT jumping out of a plane, have a spare $60 bucks, and wanna test out that arm strength, look no further. Two hours may seem like barely any time, but after hardly any time “learning the ropes” if you will, it’s time to ascend.

I’ll be honest: my first attempt, I BLEW IT. I lost my grip on the bar and fell into the net, basically shaving my face against the rough ropes. It wasn’t pretty. It was scary, and unexpected, and jarring.

But, as they always say, life’s too short to let a net-burn slow you down. I climbed back up. I repeated to myself “Just hold on. Just HOLD on.” 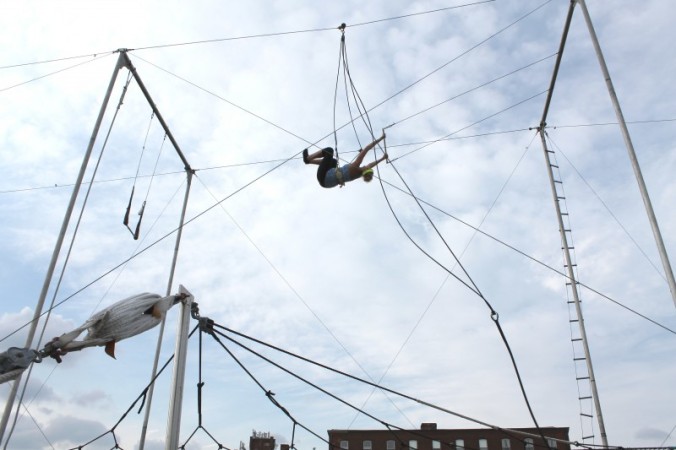 Wow, what a rush. Your body feels weightless for a moment at the top of your swing, and you can almost forget you’re ground-bound.

Your next “trick” is scooping your leg’s up so that you can hang by your knees. Easier said than done, but I somehow managed. And, unlike Carrie Bradshaw in Season 5 (you like that reference? Flashback Friday), I was able to let go. And just let it all hang out….

This might be one of my favorite photos of me of all time. For all you ‘grammers, an experience like this is RIPE for the photo opps.

Anyway, after 5-6 passes, I attempted one catch. That said, my hands were so shredded and blistered that, just as I did on my first attempt, I hit the net running (ok, flying). This time involved a lot less face-grating (though a lot more hand-shredding) and I knew I needed to call it a night.

Despite the sore hands and arms, and the almost-laughable videos of these attempts (no, you won’t be seeing THOSE failures), I intend to head back to FlySchool for another attempts. Maybe with a few more callouses, and after a few more pull-ups…. but that said, you don’t have to be an Olympic weight lifter to have a great time. I managed 3-4 insane passes, including my very favorite, a backflip! A little harder to photograph, but here’s a shot on the descent (I felt like a dizzy egg baby afterwards…) 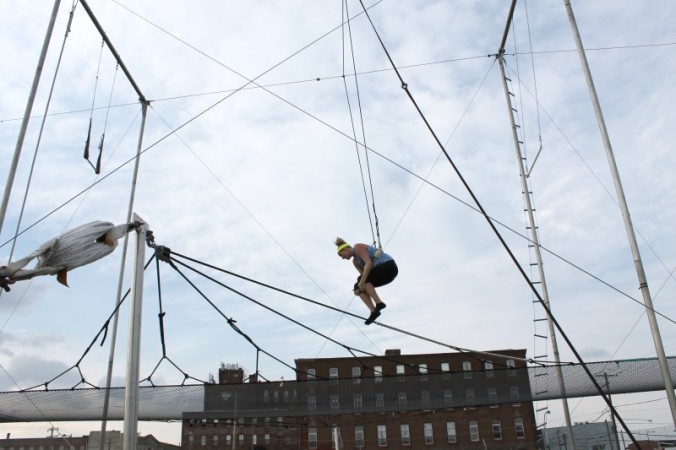 You leave high on heights, and SURPRISINGLY ravenous. An excellent full body workout without knowing it…. Now I know why all the ladies flocked to that man on the flying trapeze. I bet he had excellent abs…

Thanks so much to Mary Kelly and her funky bunch for hosting us! Can’t wait to see y’all again!

Oh, and those sexy chalk marks all over my pants?

Just another perk of the process.

One thought on “Just Call Me a Fly Girl”