I’ve been an athlete my whole life. It’s something in which I take pride. Whether manning the goal in peewee soccer games (easily distracted, I wasn’t too great at this position and was known to wander from my post), flunging my way down the strip during fencing, or (my favorite) blocking the spike dreams of shorter, less awesome girls on the volleyball court, sports have always given me a thrill, a team, a purpose. And while most of my athletic endeavors these days tend to be off the assorted courts and in group fitness rooms or the occasional steps of an art museum, I think that the athletic aspect of a person doesn’t ever truly fade away.

So when someone from MyTennisLessons.com reached out to let me know about their site (which allows users to book tennis lessons with all sorts of different instructors based on distance, cost, experience, etc) and offered me a chance to give it a try, the competitive juices started flowing, and I immediately said yes. Sure, my hand-eye coordination at the ping pong table isn’t too great, but I’m long. I’m strong. I’m basically a Maria Sharapova in the waiting… Bring it on!

So what do I do with this thing?

The process of booking a lesson was incredibly simple, and the user-interface of the site is basically fool-proof. Put in your zip code and you’ll get instructors from your area, as well as suggested courts close to you. Luckily, I live right down the street from one of the public courts in Philly, so before I knew it, it was time for my (very first ever in my whole life) tennis lesson. I invited my mom along for moral support and we hit the court. 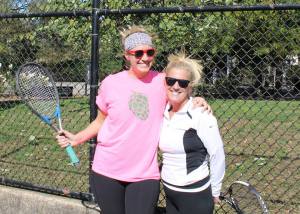 I’ll say this right there: Lesson 1 showed me pretty quickly that, regardless of your past experience with sports, the tennis court isn’t a place to be proud. If you’re anything like me, you’re going to make mistakes. You’re going to swing and hit the ball out of the “containment area”. You’ll hit it into the net. You’ll hit it into your mom (THAT WAS ONE TIME!) And sometimes, you’re gonna swing and not hit it at all.

Tennis uses parts of your body that are different from almost any sport I’d ever participated in before. Oddly enough, the sport it reminded me most of was fencing. The short bursts of energy, the closed stance. The fact that you’re using a tool as an extension of your body.

It was initially a little disheartening to not be instantly great at something. That said, I had a pretty fantastic instructor. Nick, my instructor, took a special trip out to Philly (as his normal radius is a little closer to where I grew up around Delaware County, PA) to help this first-timer learn the ropes. It was obvious that he was a total professional, coming armed with rackets, a super sweet set of tennis whites, and enough balls to let me go a little buck wild with the occasional POWER SWING. Patient and experienced, Nick spoke in a way that even someone who had never watched a match would understand. That someone was me.

The coolest thing about the site, I think, is that you can read reviews from previous lesson-takers. This makes sure that you’re getting the ideal experience, and you can choose not only someone who is convenient to you, but someone who has been vetted by other folks. There seems to be instructors for everything from a beginner to someone who really wants to step up their game. 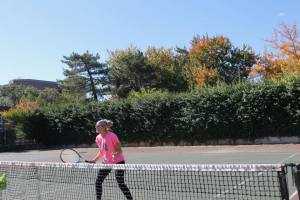 Little close to the net… but look at that focus!

It was really exciting for me to eventually, over the course of the hour, start to connect with the ball, and play a little tennis with my mom (who’s been playing for years now and basically showed me up the entire time). I can definitely see myself hitting the court again (and, come on, who can resist rocking those little skirts?!)

If I were trying to get into tennis shape, I would absolutely use this service. I also think it would be great for people who are trying to get their kids into a sport but might not know where to start. 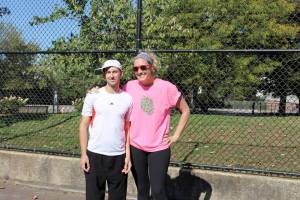 So, I guess what I’m trying to say is… if anyone needs a mixed doubles partner, I might not be your first choice. But if you wanna see a 6’1” gangly gal flail wildly with racket in hand, and periodically put together a solid volley… well, after my first lesson, I’m ready. 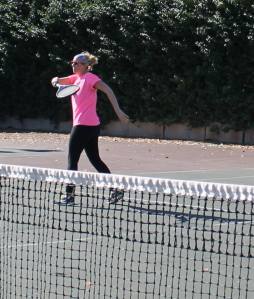 2 thoughts on “Tennis (Lessons), Anyone?”