As far as princesses go, I’ve never identified much with CInderella. Sure, I’m blond and my whistling skills have been known to call woodland critters to my side (though, in Philly, it’s mostly pigeons and Rittenhouse rats. Gross.) But I can’t stand house cleaning, I get along famously with my siblings and mother, and I’m rubbish on heels, glass or otherwise.

Last night, however, I think I had my Cinderella moment. Instead of a fairy godmother, I had the team from Philadelphia Magazine as my benefactor. My pumpkin coach was an UberX, and my gown was a hastily thrown together number sourced from Athleta and Nordstrom. Most importantly, instead of seeking out a dance with the handsome prince, I was here for one reason.

One of the city’s premier dining and drinking experiences, this soirée is put on every year by Foobooz, my go-to for all Food and Booze news in Philly. Tickets range from $85 for the early birds to $100. This lucky princess managed to win a pair, due to some sort of pixie dust I’m sure. And so I grabbed my date (read: my mom) and headed to the Marriott.

Imagine an enormous room with vaulted ceilings, complete with warm lighting and the dull roar of live music, chock full of Philly foodies, sprinkled with some of the top chefs in every genre of edibles from neighborhoods far and wide. 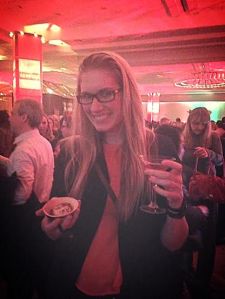 Yup, I was in paradise.

From ceviche and smoked salmon to pork, pizza, and potatoes to more terrine than you could shake a stick at (seriously…. what’s with all the terrine, chefs?) With a gauzy, tent-like speakeasy stationed in the middle of the vast space pouring cocktails from Franky Bradley’s, Olde Bar, and Franklin Mortgage and Investment Co. (my personal favorite was a Reverse Valencia from Olde Bar – Tanqueray, Oloroso Sherry, Manzanilla Sherry, and apple bitters), the party was in full swing by the time we arrived around 7pm.

After we obtained our beverages of choice, we began to loop around. Laurel’s Nicholas Elmi (who all Top Chef fans know as a winnnnnerrrr and all Philly folks know as proprietor of restaurant you can’t get reservations to) started off my night the right way with duck confit and foam, and the party kept going strong from there.

I’ll shoot you straight, when you’re surrounded by ravenous hoards of hungry folks all queueing up for tiny plates, whipping out your phone for photos becomes low on the priority list. In fact, I kinda forgot about it for some standouts. Like, sure I can’t recall EXACTLY where I consumed the most divine lobster (maybe) grilled cheese and tomato soup, when my mother thrust it in my hands (Maybe… The Hunt Room?). But I guess when I went back for my 3rd, let’s be honest here, slow roasted boar and foccaccia panino with pickled red onion, I deemed it worth for a photo (SERIOUSLY SOMEONE TAKE ME TO CAPOFITTO POST HASTE!) 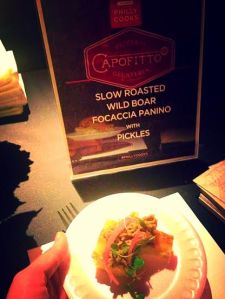 I want to fall asleep on this soft focaccia next to a pile of that boar. Is that an appropriate way to describe food?

Weirdly enough, though I rarely have much of a sweet tooth, the dessert area was my dream-come-true last night. Wonder why…. 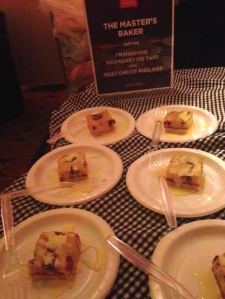 Huge up to The Master’s Baker, who have given a new lease on my concept of goat cheese’s LIFE.

But then, I reached the mecca.

Yup, 10 Arts brought the HEAT quite literally. Because, in case you didn’t know, s’mores are my favorite dessert. Want proof?

YOU GOT YOUR PROOF

That’s unbridled joy at the thought of consuming a s’more consisting of graham cracker, housemade marshmallow, AND A REESES CUP.

The rest of the night was a blur of snacking, sipping, spinning around in awe, and sadly seeing some spots sans sustenance. By 8pm, a TON of vendors were fresh out. Made me wish we’d come early, but no one wants to be THAT Cinderella. Princesses need to make an entrance. And as my stomach swelled happily, and the clock struck midnight (JK it ended at 9pm but all that eating tuckers a gal out), my mother and I raced down the escalators, pausing only for one farewell photo. 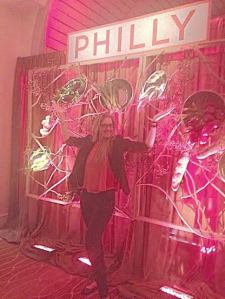 Foobooz and Philly, you know how to feed a gal. And you just let me know if you spot any glass slippers in a women’s size 12. I’m not saying they’re mine or anything…. but you wouldn’t believe the blisters those puppies give ya!