I was born in 1987. Despite the fact that this technically makes me an 80s kid, I have virtually no memories of my tender first few years. I do know, however, that I look damn good dressing to the decade (thanks for the memories, LivingSocial).

But Kevin Sbraga, Philly’s original Top Chef… he was born in 1979. Chances are, he probably gets it a little more than I do. Good thing, since his newest venture, Juniper Commons, channels the era through atmosphere, edibles, and attitude. 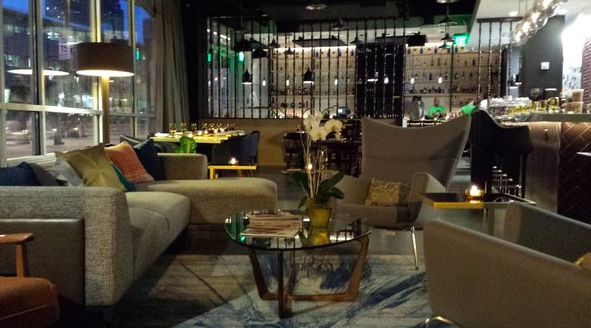 Lately, I’ve been chin deep in hitting up classes all over Philly courtesy of ClassPass so, on Saturday, my brother and I decided to treat ourselves, post-Spin class, with a time-traveling trip to the JC. The walls are covered in a wallpaper made up of 1980s newspapers, there’s a gin-centric bar at the rear, and the open kitchen vibe feels homey and warm.

While I’m typically a savory breakfast babe, the description of the pancakes (complete with peanuts, bananas, & toasted marshmallow) had me insisting my brother get that, having me stick with their take on Eggs Benedict (with country bread, roast beef, and hollandaise [Ideal for a gal who would take roast beef over ham in a second]). 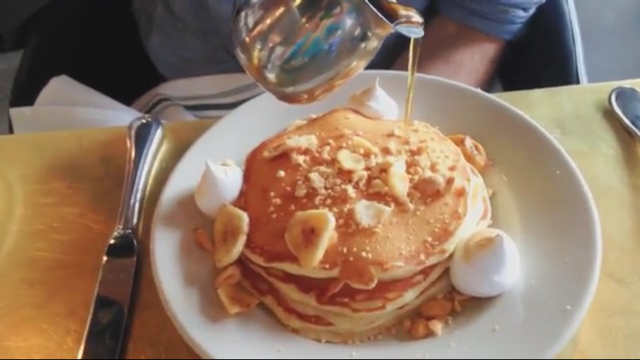 This characteristic is a VERY good thing.

Brother bear and I both agreed, though, the winner was the savory.

My very own skillet? Why THANK YOU!

I think the country bread over an English muffin was right up my alley, and they did NOT skimp on the roast beef, served juicy, salty, and hot. And while I rarely get into brunch bevvies without some sort of reason, a quick trip to the bathroom before brekki gave me more than enough reason.

Yup, this dapper dude, this mustached man is just waiting in the ladies’ room… probably waiting for your call.

By the time breakfast began, I was so hot and bothered I had to cool off. And what’s cooler than being cool?

Juniper Commons makes their OWN wine coolers! This Pinot Noir (can’t even type that without thinking exclusively of Kimmy Schmidt’s Titus) was fizzy with hints of blackberry and apple brandy (or so I was told. It mostly tasted like bubbly wine juice, which I’m into).

I took a gander at the dinner menu and, truth be told, I think it’s a little pricey for what the descriptions of the dishes sound like. But for a semi-schmoozy, little bit boozy brunch and/or lunch, the vibe would bring me back and the price point seems pretty level with the rest of the Philly scene.

Found in the heart of the city, you can’t beat the location. Throw a burly, shirtless Selleck in the midst…. I’ll be back again.