In case you weren’t aware, this weekend Pope Francis, leader of the Catholic Church, Bishop of Rome, Il Papa, schlepped out to Philly. A lot of Philadelphians escaped town, fearful of the crowds and influx of Pilgrims. But I wanted to stick around. Regardless of any religious, political, or emotional leaning, it seemed like a chance to witness something historic. And, truthfully, a chance to do a lot of laundry and enjoy my apartment sans roommates (and, consequently, sans pants).

I had high hopes for the weekend. There was a BLOODY SUPER MOON (I’m certain that’s the official term for it), there was a Papal parade, a giant mass, and a concert on the Parkway. There was also a GIANT city-wide bike ride, scheduled for the Saturday Il Papa arrived when most of the streets in Center City were off-limits for cars. I was thrilled.

I’m not a big biker, but the opportunity to feel like queen of the city on my wheeled-throne…. that wasn’t something I’d pass up. PLUS, Snapchat had a buttload of special Papal geofilters, and I’m obsessed with geofilters (add me, show me your city’s geofilters! jpreezy22) 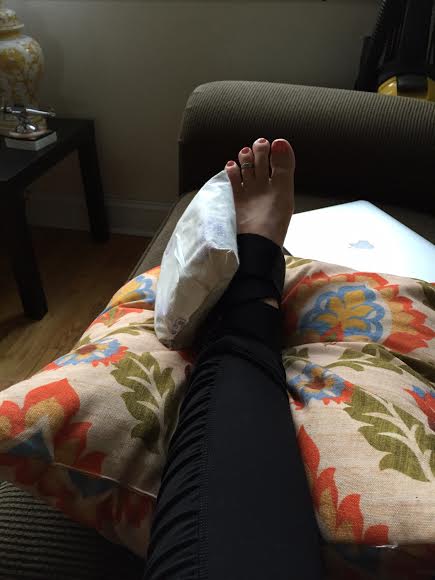 Don’t worry, I didn’t break my foot (again). But I did get rear-ended due to a sudden stop at a confusing “finish line”. The result? A bed-ridden brat living off of banana bread and Twizzlers (comfort food, eh?)

This is the closest I managed to get to Il Papa:

It was still a memorable weekend, but not for the reasons expected. I got a little blip of the Bloody Super Moon, but the clouds overhead played pretty aggressive defense.

I’m hobbling, and probably not terribly holy. BUT the laundry’s done. The geofilters are preserved for all history. And I’ve got a whole new perspective on the city….

Totally worth the semi-sprained ankle/foot.

Just gonna keep telling myself that until the next Pope comes to visit.