It’s important to start every holiday weekend off with something laden with carbs, cholesterol, and meat.  I’m pretty sure I read that… in a book.

And with my first bite of The Standard from Spread (voted best bagels in Philly 2012!) featuring cheese, eggs, and cherry wood smoked bacon on a whole wheat everything bagel, I was transported from a world of job hunting, school prep, and unpacking into a world of sun (a little bit of sun, at least), sand, and vacation-esque things of that nature.  I explored the liquor store for a bit, and held back my intense desire to buy this juice-box style Franzia.

3 liters is a juice box, right?

Our first night at the shore (OCNJ, in case you’re wondering) was an evening to celebrate the ultimate man in the moon AND the blue moon at once! We scampered over to the beach down the street to appreciate it fully. 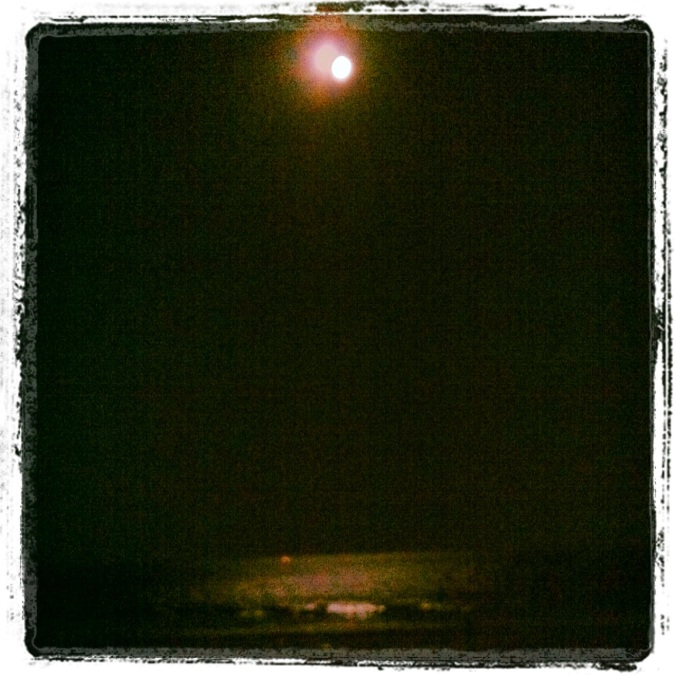 Here’s looking at you, Neil.

Day two was a day for celebrations. My uncle finally got married to his long time love, so we only had one option.  That option?

You may be struggling to see the label, but trust me, it’s Veuve Clicquot. We’re basically rappers.

We enjoyed a late night swim under the stars, lots of laughing, celebrating, and talking late into the night.  Apparently, a little too late because, as I was riding my beautiful bike home along the route that I’ve ridden more times than anything else in my entire life, the car riding in front of me jerkily slammed their brakes on, before realizing that must not’ve been their turn and driving off.

Attempting to avoid hitting the one car in front of me, I swerved, hitting the stationary car and curb next to me. It was terrifying, it was dangerous, and it was pretty brutal. The car, of course, sustained no damage as I hit the bumper with my tire.  However, since I was riding pretty smoothly up to that point, the bike itself looks pretty jammed together. I’m hoping it can be fixed, though I was too scared to bring it in initially.

I certainly won’t be riding any bikes any time soon, especially after any champagne and, other than a few bruises on the legs and tailbone (and hip, and chin… ok, maybe it was pretty bad), I’m doing okay.

Just call me the patterned lady

Consider this a public service announcement: just walk home. Even if it’s the town you grew up in, and the route you know better than the back of your hand, and you’re “all good”, there’s always the chance that someone else might not know that route. And, as a biker, you’re always at the mercy of the drivers on the road.

And, since my bones are sore and my brain could use some flexing, it’s time to hit the books.

Wish me luck on my orientation! I hope the other kids are nice to me…

What’d you do over the long weekend? Any sun or sand make it into your life?

If so, I’m a bit jealous, we only got one day and a lot of rain and clouds. But one is better than none!

The days are going very productive lately. They have to be when you have a short week, right?

On the agenda tonight (after working out):

Since that will pretty much take up my whole evening, I figured I’m going to send out a call to arms (aka the blogosphere!) since y’all were so helpful with my first post about how to be a good bridesmaid!

The plan, on the day of the wedding (aka SATURDAY AHHH!) is, after we get all dolled up, to ride around in a trolley through Pittsburgh and take pictures as a whole wedding party.  The trolley is BYOB so here’s my question:

What kind of B should I B?? Translation: What kind of booze shall we bring on this trolley?  Obviously nothing red so that rules out red wine.

Some possibilities: white wine, champagne (wooo!), and (how could we forget?) craft beer.

Any other recommendations?  It’s going to be hot, it’s going to be sweaty, and so that should be taken into account.  Let me know if you’ve got any ideas!

In other news, lunch was delicious.

Tuna sammy on a toasted sandwich thin with some lettuce for crunch, sugar-free jello cup, and steamed veggies with a heaping glass of water!

Very tasty, very healthy, and very filling.  Now it’s time to get back to work!

Can’t wait to hear your advice!!