It’s been a long time, but nothing TOO eventful happened this weekend other than a romantic lovenest weekend with Ryan. Lots of football was watched, zero soda was consumed (yay!!), and snuggling was had.  It was top notch.

However, as of 8:25 a.m. Tuesday morning, I was back in the RDU airport, and back to reality.  It’s okay though, because I had amazing goodies waiting for me in my mailbox.  It may have been the best mail haul I’ve ever had, at least in this apartment. 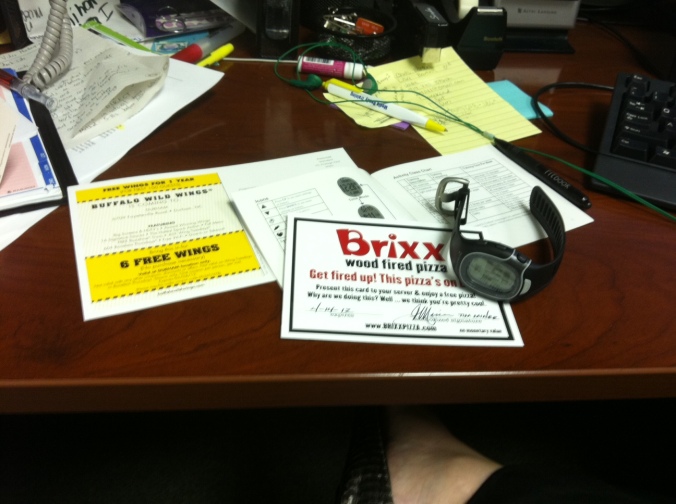 Free Wings, Free Pizza, AND my new Garmin FR60 HRM!! I know I mentioned before that I changed the batteries on my oldy and was ready to get back into action but, as I was making the change, I realized that the back of the watch was pulling apart from the plate that holds it all together.  It was time to get a new one, and since I already had a ANT stick, I got a great deal on a watch and heart band.  And, though it took me a bit to get the new one set up and figured out (that “bit” was about 10 minutes in the middle of my Zumba class yesterday) it paid off.  Check it out!

Average Heart Rate, 173 bpm and 627 calories burned, and that wasn’t even counting the first few minutes that I couldn’t get the dang thing working…

Also in the mailbox? 6 free wings from Buffalo Wild Wings when they open the new location right down the street, and a free Brixx pizza “just because.”  Seriously, if you like free foods, sign up for EVERYTHING!

On a less free note (but just as delicious), I headed back to Bull City Burger and Brewery (after a successful first visit) with a number of my brothers and sisters from my fraternity to celebrate the 165th anniversary of the founding of St. Anthony Hall.  The menu was just as delicious as I remembered….

Since I’d already had an egg and Morningstar sausage before I left, I just stuck with fries and a beer (if it’s four tiny beers but served on one paddle, it’s still just one beer, right?)

The first three, while tasty, were sort of what I expected. Good, quality beers that were clearly made well and tasted wonderful.

It was the Youngen Horny that really excited me.  It’s their Barley Wine, but it’s not made with any grapes, just grain (sorry, gluten free drinkers!) At 9.5% ABV beer with “fruity fig and caramel aromas”, this beer had by far the best and longest lasting mouthfeel of the bunch. It was smooth and delicious, good to the last drop.  What I really liked about the beer, though, relative to the rest of the BCBB brews, was that it tasted like they’d gone out on a limb and done something a little riskier.  Like they fully committed to a flavor, and just went balls deep (I’m certain that was their exact thought process when brewing…)  They owned the fact that it was a “different” flavored beer, and they took barleywine, to me, to a different level with big and bold taste without being too cloying or overly sweet.  Admittedly, I haven’t enjoyed (or even tried) many barleywines in the past, but I think I’ll approach them with a more open mind in the future. 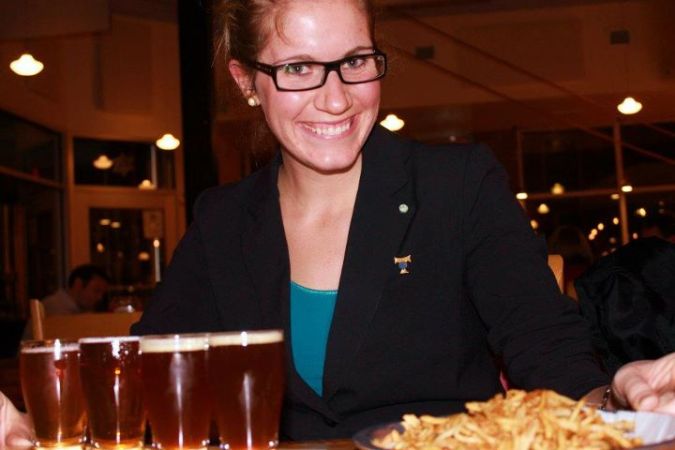 Thanks to BCBB for not being annoyed when we brought in a giant late night crew and for having a table big enough for the whole group!!

New Years are all about changes, right?

Well, my New Year’s Eve plans weren’t ALL that different from last year.  There was more beer, tastier food, 3/4 same people, but I still got to kiss my beau when the ball dropped!

I spent the night with two of my favorite people, Ryan and Rachel, my best friend since middle school.  Coolest part of this NYE in Philly?

We didn’t even have to bring jackets!!

Which was great, because there’s no way I could’ve fit a coat into that purse.

I’ll admit, my favorite parts of the night were the dinner before and the champagne and hanging out in comfy clothes after we got home from the bar, but that’s probably because New Year’s Eve always has those ridiculous expectations and expensive cover charges that Thought Catalog summed up so nicely…

Funny thing about this new year. I don’t really have any major goals, at least nothing that I want to put into words. More just a general feeling, or general life directions.  That didn’t stop someone else from inspiring me to kick my fitness back into gear.

Text from my brother on Monday:

Connor: Hope your ride is going smoothly… question…. why did you stop using your heart rate monitor? I thought that was a cool thing.

Me: Battery died, just gotta get one and replace.

Knowing that my little brother had a) noticed my blog and b) recognized that something was different with my workout regime was just that kick in the pants that I needed (Check out my first Kick in the Pants which jump-started my 40lb weight loss in 2009!).  I popped over to the grocery store and, two super sales later, I nabbed a new CR2032 (the battery needed for the Garmin FR60) and was hard at work.

I only read later how difficult replacing your own watch battery and that most folks recommend taking it to a watch-person (Watch-fixer? anyone have a name for that?)

I’ll tell you what, these tools are NOT recommended for replacing your FR60 battery:

Not my key tool, not some multi-headed screwdriver, and not the utili-tool that Ryan left here…. I felt hopeless.  Until, like a beacon in the night, I spotted it!

Glasses kit to the rescue!

This tiny tool is a precision eyeglass repair tool that I actually got the last time I bought a new pair of glasses. Well, as you can see in the image, I got it working again!! It was itty-bitty work for my giant banana fingers, but it just goes to show that being a four-eyes nerd AND a workout Barbie can pay off. 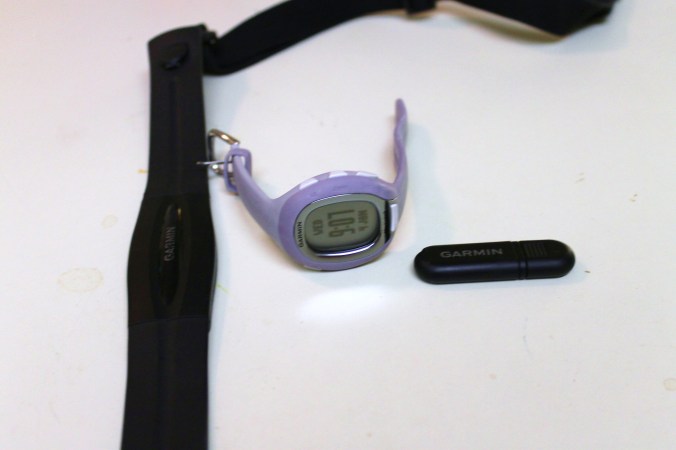 I guess I just needed someone to remind me why I started using that HRM in the first place.  And the only fair thing to do tomorrow  [despite having to host 3 friends during my fraternity convention weekend and picking two up from the airport (oh and working)] is to hit the gym running. Elliptical-ing. Whatever.

Have you ever experienced a kick in the pants?

Any big plans for the weekend?

Last night was a blast as Ry and I watched the first episode of this AWESOME new show called Alphas (which is GREAT, if you like sci fi [or syfy] or super powers like X-Men, or anything wild like that), and oops, I did end up drinking the last Endo IPA from Carolina Beer Company.  However, I was informed that they are now owned by Foothills Brewing (which I have a super sweet glass from, woo!) so maybe the beers will improve (thanks, Michael!)

Well, before I sat my booty down on the couch to watch the show and drink too many beers for a Tuesday night, I decided that it was a great day to Zumbaaaaaaaaaa at the gym!!  AKA I really wanted a chance to rock my new Zumba shirt:

PS I promise, I was off the clock when I took this picture and that’s why I’m playing dress up in my office.

Anyway, the workout was fantastic, though it made me painfully aware that I am not a dancer and merely an athlete trapped in a Zumba-phile.  Oh well.

Then, when considering the food left in the pantry post work, and after meeting up with the beau in the grocery store…. it hit me.  What to have for dinner.

Here was my plan:

I skipped the egg mixture, coated in bread crumbs, stuffed em with some stuff…. then went into the pan.

Well, the panko bread crumbs fell off nearly instantly.  And some of the cheese came outta the stuffed breast.  And this is what it looked like:

I’ll be honest, I won’t even bother giving you a formal recipe, because I think that you can kinda understand it was sort of a bust, appearance-wise. But trust me, it hit in all the right tastebuds.

I paired it with some steamed vegetables (corn/carrots/peas/green beans) and voila, dinner of champions.

Ok, worktime followed by oil change time.  Knocking that list down one at a time.  You love it. I love it.

Ever have any cooking blunders that ended up delicious?

Are you a fan of buffalo chicken anything?

I go nuts over the stuff.