Last night was a blast as Ry and I watched the first episode of this AWESOME new show called Alphas (which is GREAT, if you like sci fi [or syfy] or super powers like X-Men, or anything wild like that), and oops, I did end up drinking the last Endo IPA from Carolina Beer Company.  However, I was informed that they are now owned by Foothills Brewing (which I have a super sweet glass from, woo!) so maybe the beers will improve (thanks, Michael!)

Well, before I sat my booty down on the couch to watch the show and drink too many beers for a Tuesday night, I decided that it was a great day to Zumbaaaaaaaaaa at the gym!!  AKA I really wanted a chance to rock my new Zumba shirt: 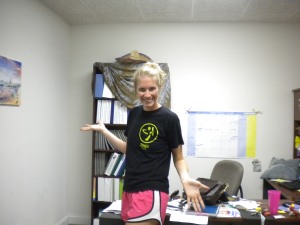 PS I promise, I was off the clock when I took this picture and that’s why I’m playing dress up in my office.

Anyway, the workout was fantastic, though it made me painfully aware that I am not a dancer and merely an athlete trapped in a Zumba-phile.  Oh well.

Then, when considering the food left in the pantry post work, and after meeting up with the beau in the grocery store…. it hit me.  What to have for dinner.

Here was my plan:

I skipped the egg mixture, coated in bread crumbs, stuffed em with some stuff…. then went into the pan.

Well, the panko bread crumbs fell off nearly instantly.  And some of the cheese came outta the stuffed breast.  And this is what it looked like:

I’ll be honest, I won’t even bother giving you a formal recipe, because I think that you can kinda understand it was sort of a bust, appearance-wise. But trust me, it hit in all the right tastebuds.

I paired it with some steamed vegetables (corn/carrots/peas/green beans) and voila, dinner of champions.

Ok, worktime followed by oil change time.  Knocking that list down one at a time.  You love it. I love it.

Ever have any cooking blunders that ended up delicious?

Are you a fan of buffalo chicken anything?

I go nuts over the stuff.

13 thoughts on “The Little Meal that Could”