Have I ever told you about my brother? Not the littlest one I visited in Australia. And not the Philly-based one, he’s the oldest (though I really still consider them all my baby brothers.) Nope, this is the middle brother, the middle child, Con.

I know, ladies. Calm down.

After you’ve taken a moment to chuckle at my dad’s silly face in the background, you can admire that stud of a brother (my genetic pool is like… stupid good looking. I get it.) And then, you can reflect on this:

This 24 year old man is, and has been for the past 18 years, the most intense human I have ever met in my life (his first 6 years were pretty mellow.) When he wanted to pay his way to his high school French trip, he exceeded fundraising enough to get a digital camera for the stay. When he wanted to switch weight classes in wrestling season, he spent more time in the gym than any kid on the team, some of them combined. And whether it’s work, eating, going out, or hitting the gym…. he goes hard. He’s a finance bro to the core and, if you know any of them, you know the type. It was no surprise to me, then, when he and his friends committed to this concept. Something totally foreign to me. But something I’m finding pretty appealing at the moment.

Nah, it’s not anti-radiation missiles. but this came up on google search so…

It stands for March 1st, but it really stands for so much more. It’s subjective to the participant but, at the core of Mar1 is this: Until March 1st, each individual committed to Mar1 lives a particularly Spartan lifestyle. They work hard in the office and harder in the gym, often opting for two-a-days OR two hour sessions. They aren’t overly indulgent because it’s sweater season. They’re eating clean, living off of salads and grilled chicken breasts. They’re not on juice cleanses, but they’re also not going out during the week. Instead of bears hibernating, this band of bros hitting the ground harder than before. And they’re my inspiration. See, the thing is, I may be a little bear-like in nature. When the weather gets cold and the days grow shorter…. I just want to climb into a cave full of blankets and emerge when it’s time to “spring forward”.  I’m no good at getting to the gym when there is darkness as I leave the office. And, though I’m definitely a morning person… where are the Zumba classes at 7am?! (Spoiler alert: they’re not at my gym!)

I’ll be over in this closet with these 18 towels and blankets.

But, though the austerity of a full dedication to Mar1 might not be in my wheelhouse…. I think I can confidently commit to a modified version. A Jan1 or “JanWun”, if you will. My dear buddy Claire and I (you might remember her from A BUTTLOAD OF MY LIFE) are kicking this JanWun off accordingly this week with a 3 day health kickoff. We’re getting started with the help of some TJs cold-pressed juices, a lack of dairy products (farewell, sweet cheese), a commitment to exercise each day (see you Wednesday, November Project), and a general “Just say no” to processed foods.

Yeah, it’s no juice cleanse. And we’re not the hardcore finance bros that have any interest in spending 2 full hours at the gym…. but I think we’re both ready for a little kickoff to remind our bodies that just because it’s cold outside, doesn’t mean we can let our inner bears out (I’ll try to refrain from my standard nickname of Claire-bear for a little while).

Yup. This is a picture that exists on the internet.

I’m not going to set any weight-related goals. I’ve done that in my life before and, while it’s effective, it turns me into a person I don’t necessarily want to be. But I AM going to commit to this. There’s been a lot of food and beers lately, but not very much sweat. And, come on, I wouldn’t write a blog about ALL THREE if they weren’t equally important! Right?

Good talk, I’ll see you on the other side.

No. The short and  simple answer to that question, for me at least, is no!

When I woke up in my apartment this morning, I was not unlike a groggy, angry bear who was forced out of hibernation too early.

I fear we have awakened a sleeping giant...

I was the opposite of a happy camper. I was an unhappy…. home-dweller.  It wasn’t pretty (as you can see.)

Lunchtime, though, did bring one happy winter reminder into my mind (and, later, into my belly):

Navel oranges have made their way into the “cheap” season at my local grocery store, and the former-soccer player and future soccer-parent in me are both elated.

Last volleyball season, I can’t tell you the number of oranges I sliced and wore in my mouth like a neon smile while my teammates nibbled and looked on in confusion.  I flipping love oranges.

Stopping by the grocery store during lunch was also important because I needed some essentials.  Namely, veggies and sandwich thins.

Today after work, I have to head to Durham for some last minute preparations for the North Carolina Girls’ Pint Out Festival of BEERMAS along with some other errands, so I won’t be able to enjoy a home-cooked dinner like I am fond of doing.  Luckily, a can drain and a few chops into lunch, I had prepared both my midday meal and my evening ingredients.

La Banderita for the senorita!

For the lunch version, I whipped up some  tuna salad with low-fat mayo, cucumbers, and tomatoes.  With enough veggies stuffed inside of a wrap, a can of tuna can definitely make two sandwich “innards” for me, so this worked out perfectly.

ALSO, the La Banderita low-carb, low fat tortillas were a discovery of mine when I first started Weight Watchers, and I’ve sworn by them ever since.  With 81 calories, 6 grams of fiber, and 2 grams of fat, they are absolutely a staple in my household, especially for taco nights or quesadilla feasts.

Anyway, the final product was a very colorful wrap with spinach, tuna, avocado, tomato, cucumbers, and a final dusting of the (now empty) bag of Crackerful chips from my Foodie Penpal of November (sad to see them go…) 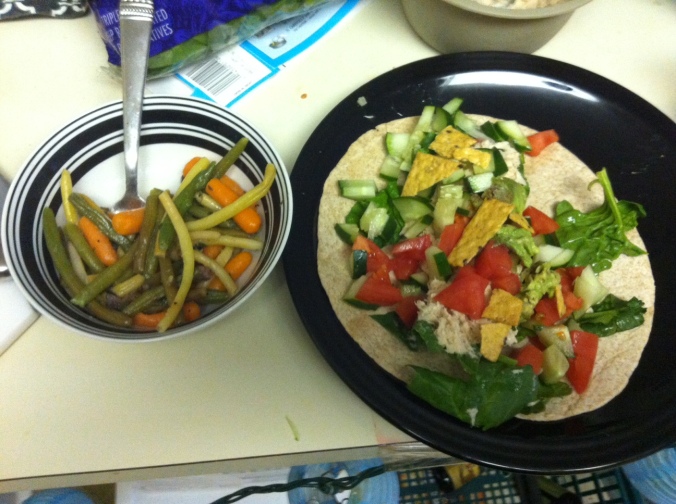 The giant looms over her meal, ready to pounce

My shadow over the food means I was starving and, promptly after this photo was snapped, scarfed my food down whilst watching Top Chef: Texas.  On the side were some steamed green beans/carrots with a butter sauce and some cranberries, from a frozen pack that was just waiting for me to eat them up.

I took the leftovers of this meal and turned it into a sandwich form for the evening realizing that, while I don’t love to go three meals in a row with the same food, two for me is pretty normal.  I realized long ago that cooking single serving meals was a pain, expensive, and a little depressing.

Now, when I’m in the kitchen roasting up enough vegetables for a small village, I pretend that maybe that village is coming over for dinner. (Fact: They never do, so I just eat their portions gradually over time.)

I’ve got a bag of goodies for later loaded with an orange, a sandwich, and some green beans, ready to take on whatever Durham’s got to give.  And, despite the freezing temperatures (of 50 degrees. I’m a weakling when it comes to temperature), I plan on finishing out No Heat November in style, orange in hand.

And in just two days, I’ll be starting off December the best way possible.  Suds and Santa style!

Do you have any fruits/veggies that you anxiously await for each year?