Barre3 has been around for a while, but, as they’re new in town, you might be wondering: What makes it different from other barre classes? Maybe you’re a Pure Barre fan, or you’ve never tried any barre classes and just want a crash course. Either way, let’s get down to brass tacks.

Barre3, unlike many barre classes I’ve taken (and I’ve taken quite a few in my day), takes place on a hard wood floor. Bright lighting for sure, and I noticed the instructor will dim the lights and turn up the music during certain points (like when you’re repeating a move for a little longer). You’ll use the barre around the room for leg/thigh work.

The only equipment you’ll use is a super squishy ball and a set of hand weights (ranging from 1-5lbs). Your instructor will bring you a mat when it’s time for that.

Pure Barre, like most other barre classes I’ve attended, is on a carpeted floor. The lighting starts bright and gradually gets darker, and I felt as though you used the barre much more often, for more than just leg work.

You use a ball, small hand weights, and a resistance band during class. The instructors bring over mats.

Barre3 – While there’s no required attire (officially), the “unofficial outfit” of the ladies of Barre3 is typically leggings or crops and tank tops. I don’t think I’d personally enjoy wearing anything with sleeves due to the larger movements of arms, but that’s just me. Barefoot in the studio!

Pure Barre – I believe they require socks (you can buy at studio if you always forget, like me. Note: this can get pricey.) Leggings were “strongly suggested” at my studio. I felt silly in crops, as I was the only one wearing them.

Barre3 – These were my first few Barre3 classes, and I gotta admit, I liked them more than most barre classes I’ve taken. This is probably due to the addition of large, dynamic movements in addition to the teeny-tiny pulses that most barre classes highlight. The class went:

Pure Barre – Format is always the same so you know what you’re in for (they do have a “Platform” Class I’ve never done, so I can’t speak to that)

Keep in mind the UNLIMITED cost of Barre3 is ONLY for the Barre3 Rittenhouse location, and only for a limited time. SO if you’re gunning for that unlimited membership, you gotta strike while the iron is hot (if you go 4x/week, that’s $8.06/class!) (Bonus at Barre3: $5 gets you childcare during your class!)

I don’t know if I could do either of these methods EXCLUSIVELY, but I think they both make a challenging and unique addition to any workout regime. I’d lean towards Barre3, personally, but I’m a big fan of those LARGE dynamic, explosive moments, and I know that’s not for everyone.

Have you ever done a barre class?

Philly is currently blowing up as far as fitness goes. I’m not the first to notice this (Be Well Philly even put together a list of all the new studios coming to town). I’m definitely not the first to experience most of these. But hey, maybe some of y’all are on the fence about some of them. Maybe you’re not sure what the workouts are like, maybe you wanna know what to wear, maybe you’re just narrowing down your list of which fitness to focus on this week / month / year. And I need a little more “sweat” in this whole foodsweatnbeers situation (it is wedding season, after all.) So I’m going to try to check some of them out. And then I’ll talk about them. And we’ll go from there.

This studio opened a few weeks ago on 15th and Walnut and I’ve been lucky enough to enjoy two classes already. And, while this doesn’t make me an expert by any means, I do think I understand the general concept of the classes. Let’s get into it. First of all, when you walk up the stairs (so many stairs, call this your workout), you’ll enter a clean studio with a sexy, sleek atmosphere. Red, white, and black are their colors and they let you know that immediately. To your left, the studio (where you’re going to be sweating your face off). 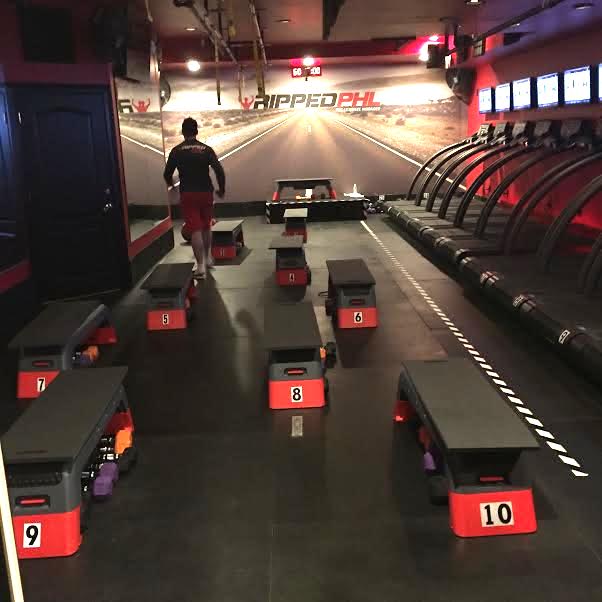 To your right, the locker rooms. These are pretty small, but you can nab a key from the front desk to keep your goodies safe, and the lockers themselves are big enough to hold a backpack, jacket, a tote. You know, the essentials. There’s also a little vanity area to get dolled up a la Marilyn after your class complete with hair dryer, curling iron, and assorted products.

But, knowing you, you’re not interested in hearing about how good the hairspray smells (pretty good). You’re here for the workout, so let’s get to it:

RippedPHL is Philadelphia’s newest and best high-intensity class designed to torch calories and push your body to new limits! The class alternates every 15 minutes between intervals on industry-leading Woodway®treadmills and strength training on the floor with TRX®, Dynamax balls, body bars, free weights, etc.

According to ME: RippedPHL is literally the only experience that has ever made me want to get on a treadmill. Ever.

It’s grueling. You can choose to be on the treadmill or ground first. If you choose treadmill (would recommend choosing treadmill), you’re going to hit these cool “Woodway” treadmills at paces and inclines you get to watch on these little TV screens. The screens also are a nice touch, showing different scenes. The first time I went was a reddish canyon-looking setting, but the second was scenes from the Boston Marathon! Since I’m someone that will never ever run a marathon, this was pretty novel. Loved the pace and incline changes, made the 15 minute chunks go by like a breeze, and added a lot of variety (read: spice!) If you’ve got a heart rate monitor, that cues up to the treadmill and you can see your heart rate as you’re running. Top of the line.

The “floor” is where you hit the weights, but don’t think you’re off the cardio hook, yet. Mixed in with heavy balls, body bars, free weights, etc., you’ll get some fun bonuses like burpees and tuck jumps! Lucky you. Then, just when you think you can’t go any longer… back to the treadmill to repeat the whole cycle over again.

As promised, this workout TORCHED calories.

BUT it’s definitely a workout that gives results. My tush was sore for days after.

Go, get RIPPED! And let me know how it went.