Pure Barre in Chapel Hill, NC recently had a Groupon-esque deal through OurLocalDeal based in Chapel Hill, Carrboro, and Orange County in general. For $36, I got 4 Pure Barre classes and, after asking around, this is one heck of a deal!!

I’ve been looking for a new exercise method to get me excited about working out again. Well… look no further.  I look excited, right?

Excited, nervous, they’re all the same.

Ok, I’ll shoot you straight: I was actually totally nervous! I’d go so far as to say there were butterflies in my tummy. After reading an INTENSE review of Pure Barre from Lauren of Raw is Sexy, I was ready for the worst. I walked in the studio, accompanied by my buddy, Anne, and, as expected, the studio entrance was chock-full of Lululemon attire for sale, as well as some fancy shmancy Pure Barre socks.  Luckily, I brought my own. 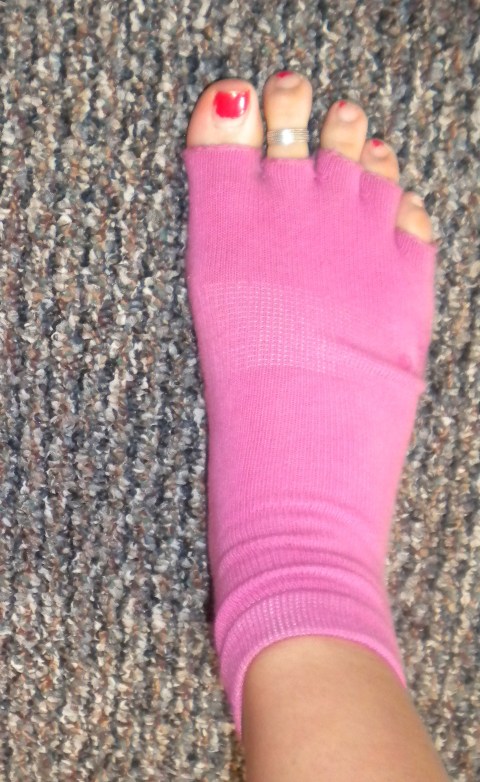 I was honestly more nervous, initially, as to what to wear than anything else. Luckily, my ToeSox have little grippy dots on the bottom that are perfect for not slipping and sliding, considering the floor is carpet!!  For some reason, I definitely wasn’t expecting that.

As for what else to wear:

My instructor asked us to grab some equipment, and I picked up what I needed. 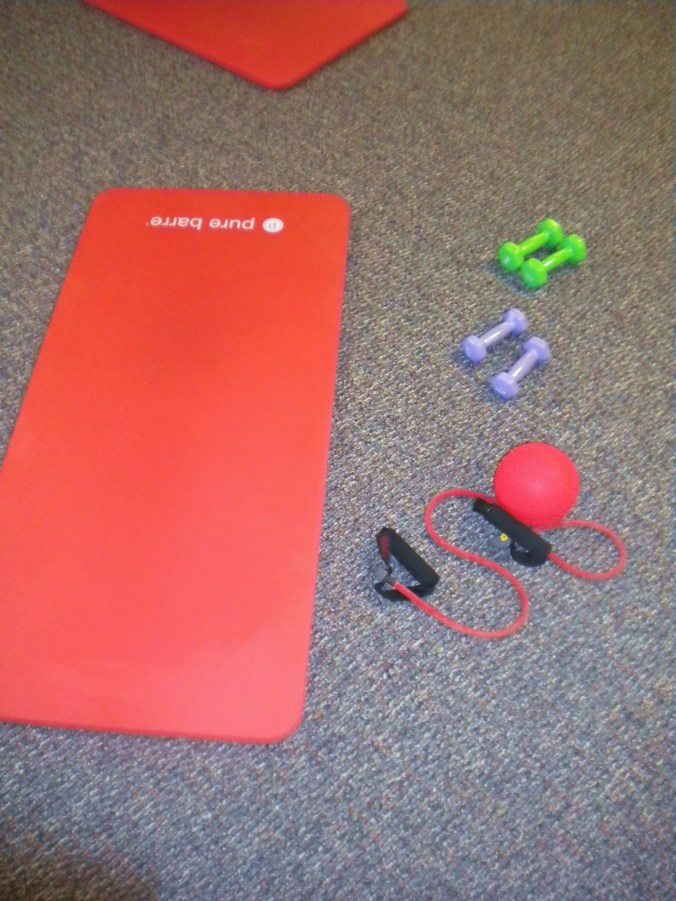 All the Accoutrements for a Pure Barre class!

What I wish I’d brought:
But I managed to make due.
The class started out promptly (which I LOVED) and, honestly, the music was much less irritating than most workout classes I’ve taken part of (like, for instance, the BodyPump track featuring none other than…. Nickelback. Blech.)  Within the initial five minutes, I was sweating.
Within the first set of pushups, I was straining.
After the first set of squats at the barre, I was burning.
Not just a little burn.  A burn that felt like the insides of my thighs were literally being hit with a cold blue flame.
We started with some small weight lifting and a few leg actions that were very reminiscent of that time I  tried pilates. We did pushups, we straightened our legs, and, without fail, I was the first person who was approached by the instructor who fixed my form.

You want me to do what with my butt?

There was a lot to think about, much like pilates. You were tucking your hips in, you were straightening your leg, flexing your foot, pointing your toes, and squeezing balls between your legs (in the least sexual way possible). Despite all the well-dressed ladies looking fierce in their form fitting Lulu gear, I’ll admit, there was NOTHING about this class that looked sexy. That’s not to say that the women didn’t all look gorgeous. But when they’re drenched in sweat, standing on their tiptoes, thrusting their hips back and forth, it’s a lot less sexy than you’d think (who bets someone finds my blog in the future searching “Lulu hip thrust”?)

My thighs and butt definitely felt the most worked out, with my abs feeling the least. The thigh set at the bar was AMAZING! Literal burning, like Icy Hot minus the sexy rubbing that goes on beforehand. Just Pure Burn. The portions where we were squatting and on our tiptoes, working in tiny little thrusts and tucks, I felt like my legs were about to reject the rest of my body and walk away.

I think, however, I have figured out why the abs weren’t getting their full workout.

An entire ab set was supposed to be set with us sitting against the wall, and your head/back against the wall. Only, when you’re 6’1″ with a torso that goes on for days, well…. apparently the studio wasn’t ready for that.

My head was literally jammed against the wood of the bar and I couldn’t even turn it straight. It was…. ridiculous. Anne looked over at me and chuckled as I strained to turn and face the instructor (which required a bit of bobbing/weaving around the wood.) It was hilarious, it was distracting, and it was REALLY difficult to adjust accordingly.

Oh well, I guess there aren’t too many tall ballerinas, right?

The tail end of the class focused on…. our tail end.  Lots of booty work including lifts and bridges that pushed the burn out to the last moment of class.  I felt worked the entire time. There were very few breaks, very little arm work, and LOADS of sweat (I think my perspiration may have left watermarks on the bar.)  I felt worked out the whole time.  I feel like the lifting at the beginning was kind of silly and put in there just to make use of those fancy looking weights.  However, the aspect of the ball was CRUCIAL and I think a core part of this Pure Barre method.  The resistance band was best for stretching.

My fanny is sore, my thighs still feel like there’s some creep who’s lighting small fires on them now and then, and I honestly can’t even wait to go back.

What’s been an exercise that’s gotten you excited lately?

Have you ever tried Pure Barre? If so, what do you think? If not, would you want to?

38 thoughts on “Pure Barre: A Breakdown (by a First Timer)”