Good morning, y’all! I’ll be honest, I’m either at a training for work right now or on a plane. Either way, while I’m being a busy bee (not unlike that time I went to the Busy Bee Cafe with NC Girls’ Pint Out) I figured it’d be nice to finally write up my amazing birthday of Joy and Joyness.  And honestly, since that fateful birthday where I finally wrote my feelings on the Healthy Living Summit and y’all responded with an outpouring your feelings, I’ve been so busy I’ve hardly had time to breathe.

Let’s do this thing.

I started my birthday the only way I know how: Wearing a tiara. 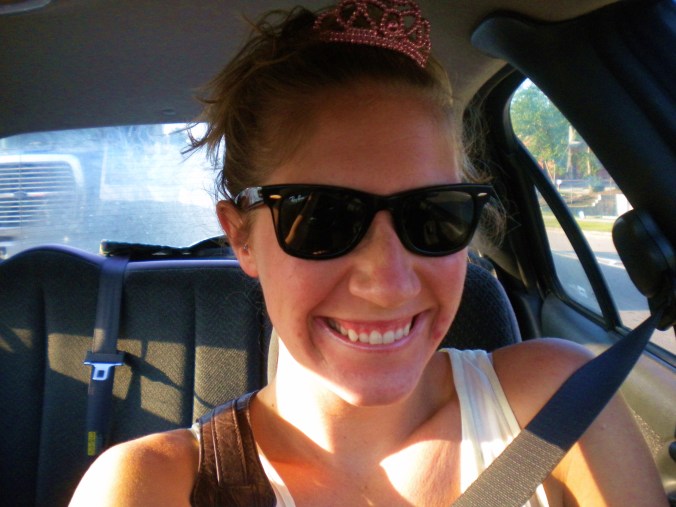 Tiara before 8 am = totally normal.

I opened a package from my tumblr buddy (a secret penpal I’ve had for the past year, can’t wait to find out who (s)he is so I can thank her!) that I’d been saving for the previous 2 days.  And that’s friggin’ hard because I hate waiting.  I’ll shoot you straight: It was worth the wait. 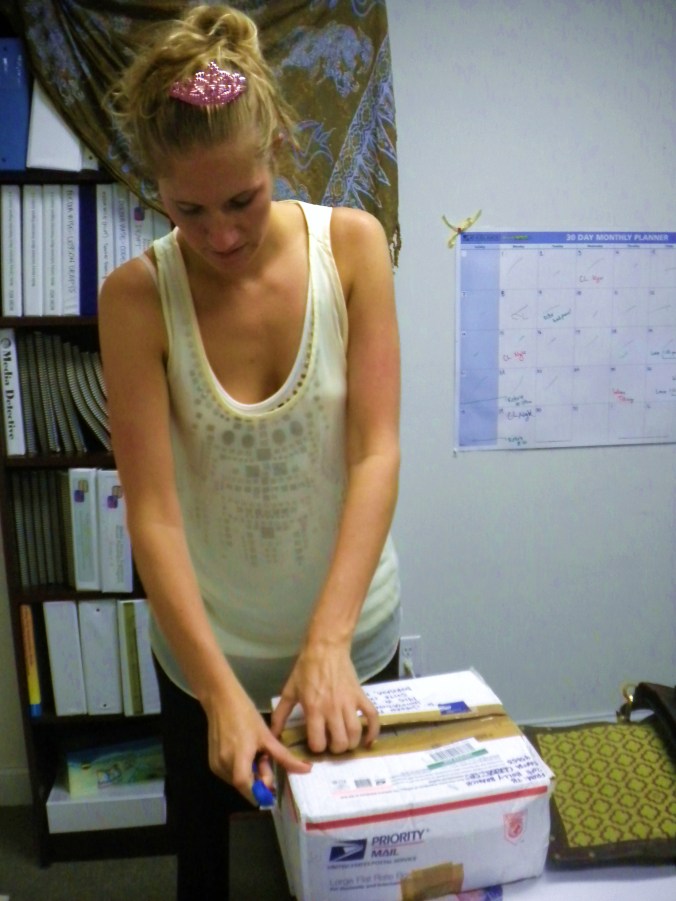 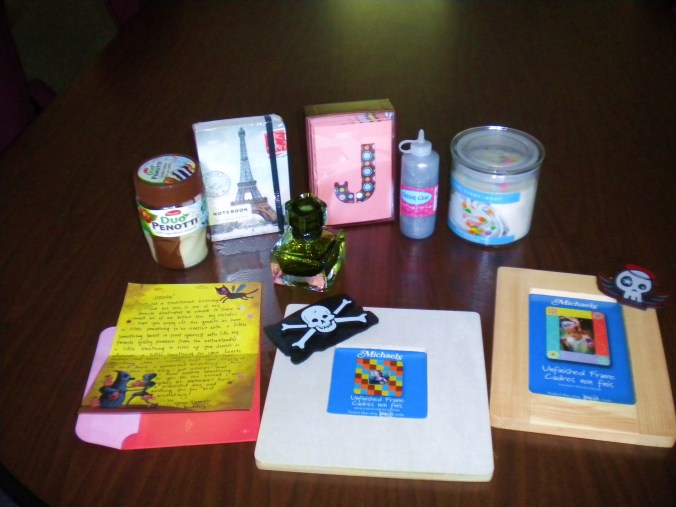 Well, I knew that the rest of the day was bound for greatness. 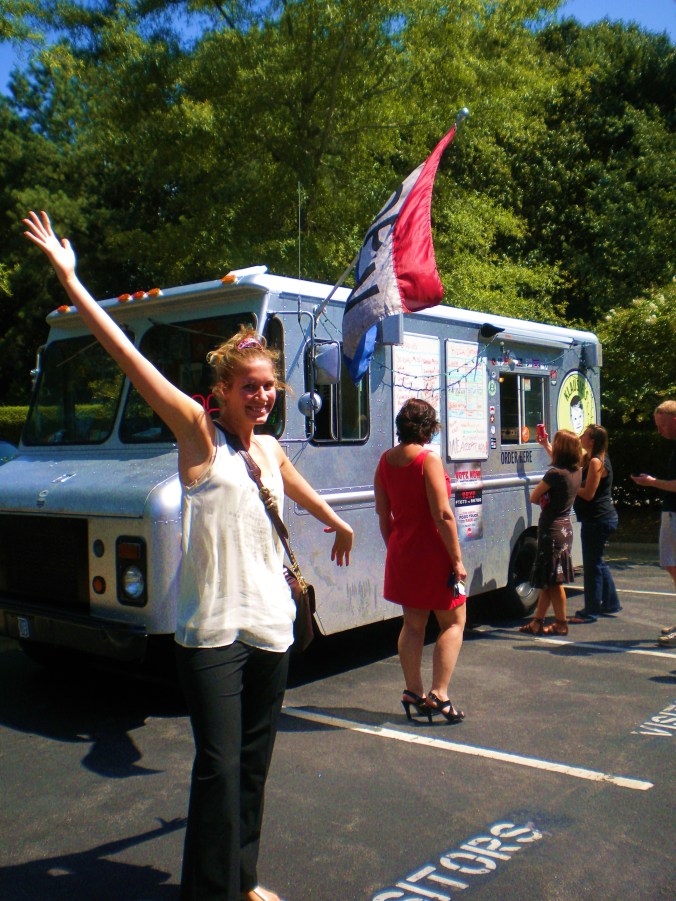 The most delicious automobile

Klausie’s offers a delicious slice (or four, if you’re a birthday girl buying for your beau) of thick crust, OH SO CHEESY, incredibly flavor pizza. Their toppings are always fresh and tasty and the crust has a foccaccia-like texture that ends up greasy and good by the time you eat it.  It’s not what I would call “diet friendly”, but it’s very Jordan friendly. 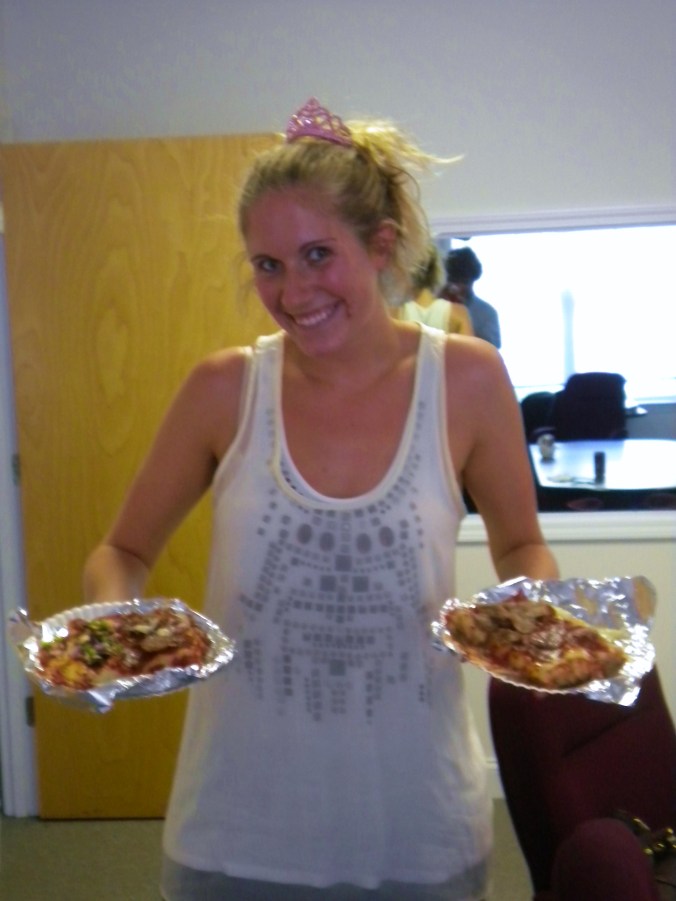 My haul. I promise, two were for the beau.

I got a veggie slice and a meaty slice (put em together, that’s a Hypocrite slice!) and enjoyed it with a Coke Zero. Heavenly. I can’t imagine a more enjoyable birthday lunch, enjoyed with my studly man (who had just de-planed a work flight from Maryland less than an hour before!) Somehow, I managed to get through the rest of the work day, completing what needed to be done before scampering off long enough to prep and primp for my big night out.

Thanks to Veri for brightening my day with some sunflowers!

The plan? LivingSocial Adventures was hosting a Pub Crawl with Craft Beers and Organic Bites in Downtown Raleigh. My friends and I met up at my home and before I knew it, we were en route to Tir Na Nog (our first stop of the night!)

The schedule, printed up nice and neat

While we waited for our beers to show up, we enjoyed a spinach artichoke dip and some pita points.

No beers = toast with appetizers!

Unfortunately, the beers took a little while to come out, so we were just waiting after finishing our foods. But when the beer came out, we were in for a treat.

Great Divide Brewing’s Hibernation Ale was first on draft for me. A boozy winter ale that I’d never heard of, so I figured why not?! It was tasty, it was drinkable, and it did the trick.  Never one to drink alone, I decided to make friends. Friends…. with chicken wings.

Kim and Tim, thanks for the chick'n!

They were just a few of the many folks who I met/celebrated my birthday with that fateful August 24th. I actually kept going up to new folks and saying, “Happy my birthday!!” Some laughed. Those were my friends. Others…. well, we just walked away from them.

I even earned my Birthday Brew Badge on Untappd!! Untappd is my very favorite way to track/rate my beers, and if you wanna be my friend, DO IT! My name’s JPreezy22!

Up next was The Oxford, a “gastropub” in Raleigh. The appetizers here were…. insane.

Words don't do them justice

While I didn’t love the beer options (Carolina Pale Ale… not my favorite), Panko fried avocado is not of this world. It’s the crunch of a mozzarella stick, the creamy of brie, and the taste of avocado. All my dreams come true. I even tried some of Ryan’s Wellington Bite, and it was so savory, rich, and delicious with a crusty pastry around it. Every nibble was better than the last.

My knight in sharing armor

We all ended the night at The Big Easy, a Cajun spot in Raleigh with live music (at least there was live music on Wednesday!)

I’ll admit, the appetizers at this spot were teeny tiny, and left much to be desired. But the beer (and the company) were great.

Ry and one of our hosts, Danny!

Ryan even surprised me with a massive brownie sundae and a candle!

It wouldn’t have been half as fun without my buddies along for the ride!

And Ry even surprised me with a flower of his own. And by flower… I mean giant leaf.

I heard 3.5 years is the "leaf" anniversary. So nice of him to remember. Note the extreme tilt of the tiara. Yup, that's the end of the night.

We had a total blast, and big shout outs to the folks at LivingSocial and all the venues we hit up. I actually love the idea of LivingSocial adventures and hope to do some more in the future. I think that the process could’ve run a little smoother with the drinks and foods being out/coming out at the same time, but other than that, blast in a glass (several glasses.)

What’s been your best birthday party?

Have you ever done a LivingSocial Adventure? Or would you? What would be your perfect adventure?

22 thoughts on “A Very Jordan Birthday: Food, Sweat, AND Beers”