Asheville: It’s a hell of a town.

Even though I was there for less than 24 hours (whoah, didn’t even realize that until now), I certainly didn’t go wanting for food during any of those hours.  My mother flew in on Friday night and, after whipping up a DELECTABLE cream cheese dip which we nibbled on and enjoying several cocktails, we hit the hay hard with alarms set for 7:30 am.

We drove across North Carolina in a few hours, and before I knew it, we were in the mountain hippy HQ, Asheville!

And while I’ll write more about the trip later, I figured a PERFECT Six Pack Sunday would be on the fantastic foods I enjoyed during my stay. 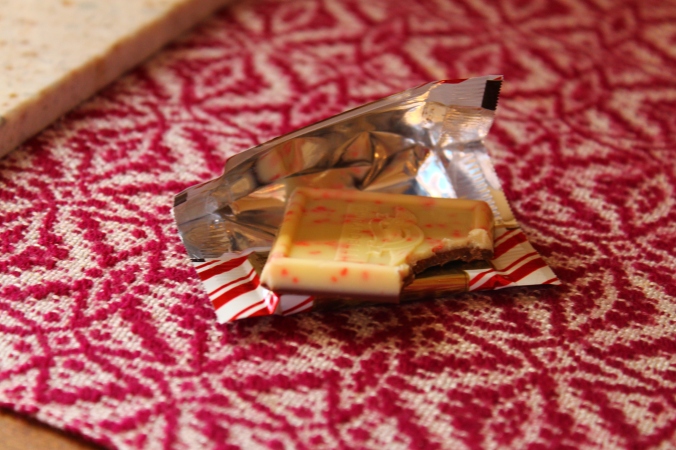 Upon arrival at the Corner Oak Manor, our B&B for the weekend, we were welcomed with my FAVORITE of the Ghiradelli chocolate squares.

It was a perfect, pepperminty way to be welcomed to town.

This photo truly doesn’t do the Turkey Reuben from Julian’s Gourmet Sandwiches in the Biltmore Village.  The hot turkey, the 1000 Island Dressing, the marble rye…. it was a dream come true. AND, in a true game changer, I actually liked the (not-so) sauerkraut. Our first meal in Asheville was served with Kettle cooked potato chips, and fueled massive amounts of shopping.

Much better, good to the last bite.

Match made in heaven

So it’s not like I didn’t know this before, but something about pretzels and beers together just make both taste exponentially better.

My first trip to the legendary Bruisin Ales was timed right, apparently, as there was a tasting of Sierra Nevada beers.  Word on the street is that the West Coast brewery’s looking to set up shop on the East.  Well, I personally think that Asheville’s got Sierra Nevada written all over it.  Just saying….

Ok, after looking at that picture, I want you to read the description of my new favorite store concept.

Olive & Kickin’ sources the freshest extra virgin olive oils and balsamic vinegars from hand selected growers.  They are held in the store in stainless steel containers called Fusties that allow you to sample the individual flavors of each prior to buying them.

So basically it’s a store that sells Olive Oil and Balsamic Vinegar. And you can sample all of it. Chipotle EVOO? Garlic EVOO? Cranberry Pear Balsamic?

I wanted to gargle with it.

The women who run the shop, Karen and Vic, are nice as nice can be, and we could hardly control ourselves as we sipped gourmet oils and b.v. If you go to Asheville, do NOT miss this shop!!

Recommended by more people than any one spot in Asheville, this establishment lived up to the hype.  Described by the restaurant:

Brian’s Shrimp and Grits » When your chef puts his name on a dish, he has to be pretty proud of it. Such it is with our shrimp and grits – seven large delectable shrimp served over Goat Cheese Grits and anointed with a spicy roasted red pepper sauce

It couldn’t get any better. The creaminess of goat cheese lent itself so well to the grits, and the shrimp, plump and fresh, were spicy in that way that demands you keep eating it.  Don’t worry, I did. I virtually licked my bowl at the end, and that last bite was like saying farewell to a best friend.

A best friend that you’re about to digest.

6. Putting the Breakfast in B&B

Corner Oak Manor was actually the first B&B I’ve ever been to, and I loved the Breakfast B just a little more than the Bed B. Creamy eggs with spinach, tomatoes, and feta served with fresh fruit and pepper bacon was a great way to fuel the long trip back to Durham.

It was a most delicious weekend, and rest assured, I’ll write more about the trip later. Now I’m off to digest and (hopefully) finish my applications.

Asheville, I’ll be back, I promise. And I’ll definitely come hungry.