Sundays always taste much better after order has been restored.  I’m speaking, of course, about the infamous UNC-Duke rivalry and the amazing game I was lucky enough to watch last night. Order in my apartment… still working on that (it doesn’t NOT look like a clothing explosion in my living room).  Whatever, I’ve got more important things to focus on.  Namely: Six Pack Sunday!

On Saturday, thanks to the reminder from Goob over at Hey It’s Free (my go-to source for freebies in the world), I strolled over to Auntie Anne’s to join about 35 total strangers in a line for a free Auntie Anne’s pretzel. I have ZERO problems waiting in lines for things like this… Sure, they’re normally less than $3 and definitely something I’d buy for myself if I wanted. But you know what tastes better than a $3 pretzel? 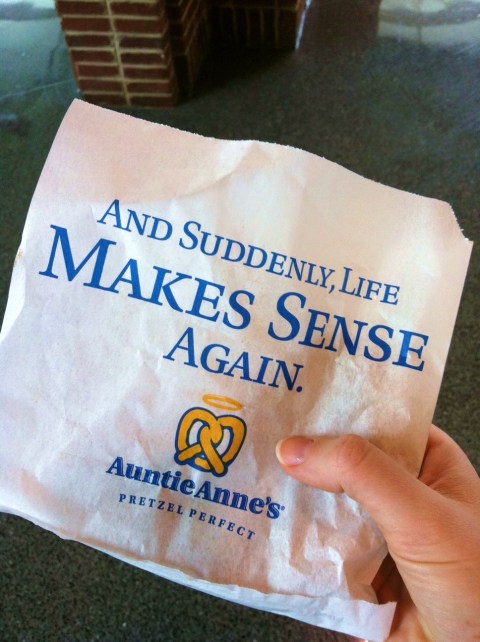 I agree with this wrapping.

A $0 pretzel. I simultaneously wish that free pretzel day was every day, and thank my lucky stars that it is but once a year (I think.)

2. Seafood Risotto Should NOT Be Cooked in a Bag

You gave it the ol' college try...

While I was at Whole Foods last week, I picked up a package of Seafood Risotto with BARRAMUNDI (the sustainable seabass). From the folks at Australis: The Better Fish, it was a classic case of desperation for a tasty, simple meal I could whip up at home in no time.

It was…. disappointing. The smell as it was cooking was pretty solid, but the texture was mushy and lumpy, and this whole pack was a little low on actual seafood inside of it.  Thumbs down from Jojo, won’t make that mistake again.

Anyone wanna make some risotto with me?

You know what’s great about dressing up for watching a sporting event?

When you’re a lady, all this really translates to is “Don oversized jersey. Yank up leggings. WORK IT!”

I was obviously channeling #35 Reggie Bullock whilst cheering my face off at the game. I think it was important, and I hope he felt my dominating presence in Durham all the way from Carrboro.

Post-win, I avoided the standard “Rush Franklin Street” that I normally enjoy in order to end the night sober and un-singed (UNC fans are fond of the traditional “leaping over bonfires” after a big win. It can get dangerous). I headed over to Melissa’s house as it was early, still, and figured I’d help her whip up some chocolate meringue cookies she learned about in Runner’s World.  Only I’m pretty sure replacing the sugar with Splenda was a bad decision, because these don’t look like ANY meringue cookies I’ve ever seen…

Not sure how thick those are?  Here’s a better shot.

Yeah. Paper thin, brown disks doth not a cookie make. Back to the drawing board… 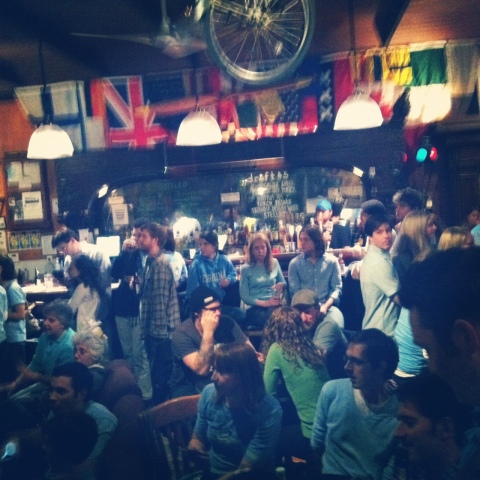 I’d love to say that I met up with a bunch of buddies to watch the game but, honestly, I just showed up at a bar and knew that I’d meet a zillion UNC fans, and it’d be a guaranteed blast, no matter what. I was right.

I hit up The Station, a hipster haunt in Carrboro that I spent my undergraduate career avoiding in favor of dancing to 90s music. But, on gameday, with a giant projector and men rocking Luchadora masks and jumping on tables to shout cheers, I couldn’t have chosen a better location. And even though I only knew one of the zillions that made up the crowd, by the end, I felt like everyone was bonded together by our uniform of Carolina Blue and our love of those Tar Heel boys.  It was magical. Made even more magical by halftime gummy bears… 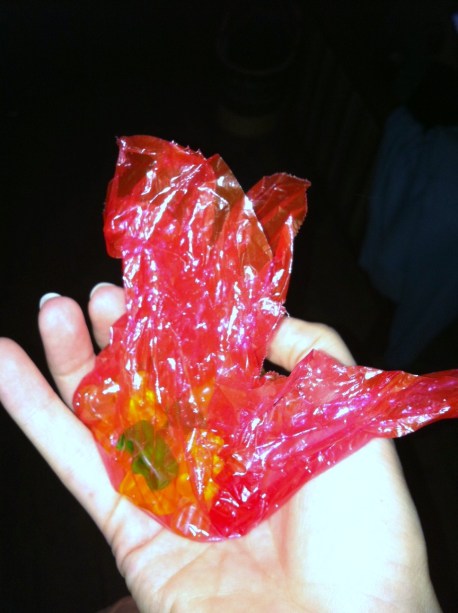 Oh, you don’t know about gummy bear halftime?  It’s only the most magical of all edible halftime shows.

Today, after a little over a mile run(!!) I knew I had to get in the pool for a little while to ease those aching bones. Though my years of swimming as a youth taught me a LOT about swimmer’s ear (one of the WORST infections to plague any swimmers… if you’ve experienced it, you know it’s hell), I experienced something today that I don’t think I ever realized also plagued swimmers.

Yes, swimmer’s eyebrow. It happens when one or both of your eyebrows becomes trapped in your swim cap, despite having donned it countless times before….  I eventually managed to release the brows from their pink prison, but I know they’ll never fully recover.

Pray for them, friends.

Who are you cheering for this March Madness?

Ever have any hilarious recipe fails?