Wanna find most of the cool beer people in your city at one event? Might I suggest throwing a bottle share event? Not only will everyone FLOCK to the opportunity to enjoy each others’ company, but I guarantee that they’ve all been holding onto something special. A bottle, big or small, that they’ve been itching to show off and share in the company of fellow beer geeks.

And, in Philly, despite being tardy for the party (err…. the RSVP), I managed to secure a coveted spot to one of these events, Bottle Share #2 hosted by Philly Tap Finder and Philly Beer Scene. I grabbed my Prickly Passion Saison from my beloved New Belgium, which I’d been saving for something (though I didn’t know what until last Sunday) and was dropped off, bottle in hand, inches away from Soup Kitchen Cafe, our hosts for the afternoon/evening.  And, shortly after the rare beauties hit the table, the bottles started popping.

Some of them were corked, so there were literal bottles popped.

There were some incredible brews brought to the table (literally). And I fell in love with a few. Highlights?

There were so many other beers that I tried/enjoyed, but I think I was itching for some sour brews. And, though that picture washes out the mac & cheese, I promise, it was creamy, cheesey, and heavenly.

To let my inner vegetarian out, I requested the veggie-friendly dish first (there were lots of meaty sammies too, I’ll get to them next). 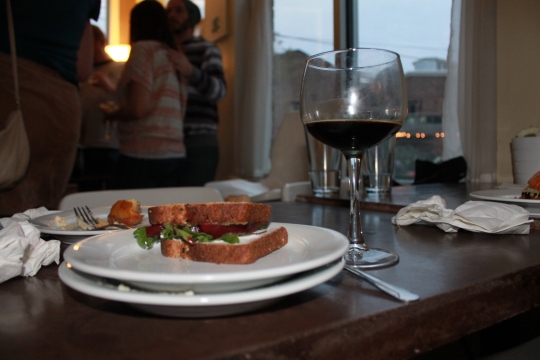 Goat cheese, arugula, beets!! Totally enamored.  However, since it was a small portion and I needed something to soak up all that beer, I tried a few of the other offerings….

Sorry for the lousy framing of this picture, I was hungrier than I was interested in snapping the perfect shot

The rare and exotic beers flowed freely, the conversation and geeking out was incredibly pleasant, and I felt like I was among my people. That also resulted in very few shots OF those people, as I was trying to chat and enjoy and not get drunk all at once. This inevitably resulted in a glass of water or a handshake occupying my hands much more than the camera.  But man, we did some work.

Just a fraction of the bottles consumed.

Big thanks to Jared from PhillyTapFinder and Mat from Philly Beer Scene for putting it together AND for letting me know I snuck in off the wait-list.  Because this was an event NOT to be missed.

HOW ABOUT what would you bring to a potluck dinner with all of your classmates on a Friday night? (because I have one, but have to travel a bit with my dish… on public transportation….)

I wonder if I could host one of these of my own…. potluck bottle share at Chez Jordan? That sounds too cool…