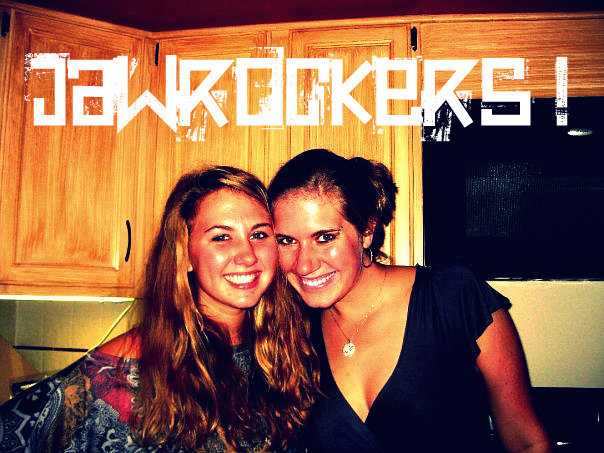 That’s the one. (full Picnicking credit goes to Devon)

Jawrockers. That’s what my beautiful cousin, Devon, called my breasts at the time. Admittedly, this picture might not be doing them justice. But at the time, my bras were larger than I ever imagined they’d be since they first appeared as mosquito bites in 1999 at the tender age of 12 (is there a letter before AA? No? Just making sure.)

See, one of the perks of being 40 pounds heavier was that at least 10 of them were dedicated to my chest region. And, while the rest of me was certainly rounder and wider than I liked, the boob thing…. well that was pretty nice. I was filling out shirts and dresses with lower cuts than I would’ve dared earlier in my life, the deeper the V, the better for me!

Sorry for cropping you, mom.

And it’s very easy to hide your growing weight problem underneath a healthy serving of cleavage. That’s mostly what I did. I stopped wearing fitted pants and jeans, refusing to bump up a size or two, and instead rocked leggings and low-cut dresses mostly always. No one looks at your stomach when you jam your chest in their face, right?

And then, in March 2010, I started this whole “let’s stop being an unhealthy slob” movement that kind of totally transformed my life and my body. And, as the pounds melted off my body, I bid my jawrockers a fond farewell, tucking my enormous bras into boxes to save just in case I needed to transport softballs or grapefruits on my chest in some strange future scavenger hunt or obstacle course. Initially, I missed my lovely lady lumps. I’d grown fond of their sweater-filling capabilities and won’t even pretend like I minded the extra attention they tended to bring. But then, something beautiful happened. Without these obnoxious knockers, I could finally embrace the free-spirited attire of one of my reality TV idols.

Yes, Kaia, the never-not-nude lady from The Real World: Hawaii. Seriously: did this chick EVER wear a bra? Hell, she rarely saw fit to wear a shirt…. And though she was often over-shadowed by Tec’s wild antics, Ruthie’s struggle with alcoholism, or Amaya’s enormous drama, Kaia was my favorite. And if her membership in the itty-bitty-titty-committee warranted a life full of coconut bikini tops and backless shirts…. why not me?

Thus began my romance with my less-than-well-endowed chest. And while I support all of you hearty bosomed babes out there, this is a post in honor of the rest of us. Those not graced with double Ds, the gals who prefer our mole hills to your mountains. This is a post in defense of small boobs.

No bra? No biggie.

Small boobs, while seemingly inconspicuous, can pack a punch. That is to say that they are shown to be more sensitive than the larger ones. That’s right, a study done at the University of Vienna found that “large” breasts were 24% less sensitive to touch than “small” ones. And while I refuse to read this study further since it’s Memorial Day Weekend and I’ve got enough scientific studies to read during school, I’m gonna go with “score” on that one.

With a small chest, we not only don’t have to worry about our posture as we have to strain to carry our over-the-shoulder-bolders, we also may have an easier time during breast self-exams. “It’s easier to detect a lump in the back of smaller breasts, since there are fewer layers to feel through,” says oncologist Marisa Weiss, president and founder of breastcancer.org.  So double score, there.

Not only am I saving a fortune by not buying bras (because, real talk, eff bras) BUT this whole bra-less thing might actually correlate with firmer, less droopy breasts in general. This bra vs. no bra study made me appreciate the French more than any fries, toast, or kissing (ok, maybe not that last one. French kissing is maybe better than this particular study….)

I may or may not have bought this shirt in 5 different colors. (Spoiler alert: I definitely bought it in 5 different colors.) Victoria’s Secret gets it. They recognize that, while most of their models are rocking some serious sweater puppies, some of their clientele may not be so curvy. Enter: the bandeau. A small-chested lady’s best friend, this accessory not only protects you from nipping out when a stiff breeze comes along, it also can brighten your outfit with a POP of color. No underwire necessary.  I’ll tell you one thing: I would NOT have been able to rock this style (or my bevy of bandeaus) 2 cup sizes ago….

I know that was a lot.

But I’m serious here, I can’t speak highly enough about a life sans Jawrockers. And while I’ll always think fondly of the days where my breasts could feasibly knock someone out, I couldn’t imagine being happier with my “exquisite miniatures” (Bamford, 2001).

14 thoughts on “In Defense of Small Boobs”