I first learned about Shake Shack several years ago, while I was still in North Carolina, when my buddy dated some sort of manager or something. I don’t really remember his exact role, and I refuse to check LinkedIn for that kind of thing, but it was a very gentle introduction to the concept of what was already a staple in New York for nearly a decade.

Coincidentally, about 3 years ago, Shake Shack must’ve heard I was moving north, because they decided to open up their first Philadelphia location just about a month before I became a permanent resident of this fair city. Me and “The Shack”, we’ve had some good times together. Almost all were burger related, and I’m more than okay with that. And, when they decided to collaborate with Yards Brewery and La Colombe to brew a very special Coffee Stout, well, I had to make a stop to check out the brew! 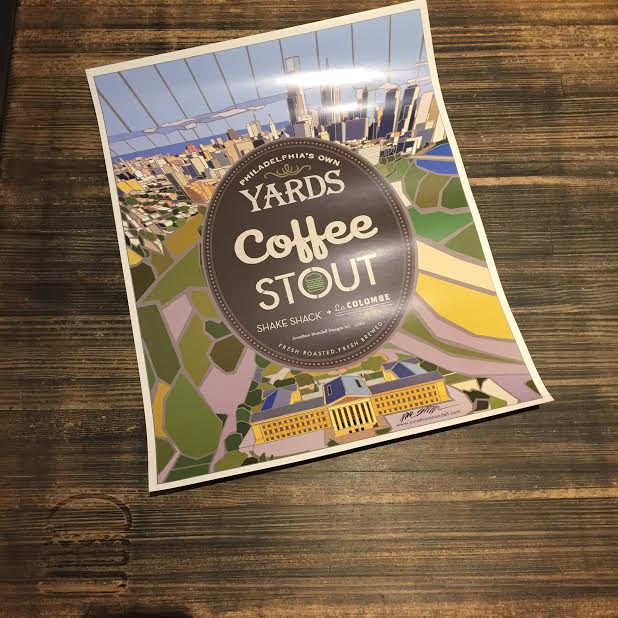 As Shake Shack, Yards, AND La Colombe are all about community, $2 from every pint sold was donated to City of Philadelphia Mural Arts Program. And, instead of the typical Yards Love Stout, this Coffee Stout is a dark ale brewed with roasted malt to create a smooth, creamy brew. La Colombe coffee beans infuse the beer with lavender, orange and caramel. It was a blend of typical CO2 pour and nitro, making it a realllllly smooth mouthfeel and experience.

If you’re near a Shake Shack and you see it around, FIND IT!! And drink it.

However, as the team for Shake Shack is insanely generous, they didn’t stop there. They wanted me to try something new.

That’s right, Shake Shack is going BEYOND THE BURGER! And straight to Clucktown with their Chick’n Shack. This sammy is a crispy 100% all-natural and antibiotic-free chicken breast with lettuce, pickles and buttermilk herb mayo. 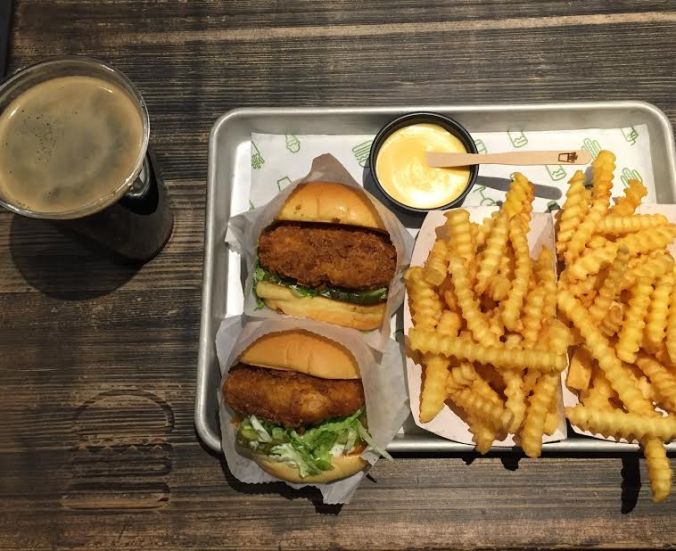 I promise, I only ate most of this

Y’all: It’s so good. There’s been a lot of comparisons made to other chicken sandwiches, some local, some less local. But I beseech of you: go in with a clear mind. Order a Chick’n Shack. Get this beer (or the classic Shackmeister Ale). Get a side of cheese fries (do NOT skip the cheese.)

Pro-Tip: Order a side of cherry peppers (traditionally reserved for their SmokeShack). Take a bite of the sandwich, untainted. THEN, doctor the hell out of it by slathering on some cheese sauce and cherry peppers.

I don’t even know how to put into words that bliss. Heat, melted cheese, chicken, PICKLES! Rapture.

The fellows at Shake Shack Center City, Tom and ESPECIALLY Derek, took SUCH good care of us. In fact, they wouldn’t let us leave until  without a boozy adult dessert.

Talk about a sweet ending!

What I SHOULD have done after this meal: Take a long run with the Shack Track and Field group.

What I DID do: promptly waddled home and laid in bed, drifting to a full-bellied half food-coma, half-regular sleep.

SO MUCH THANKS to the entire team at Shake Shack for treating me to the tastiest pre-blizzard meal possible. Perfect prelude to a long weekend hibernating… If you have the ability to hit up the Shack in Center City OR University City, do yourself a solid, Chick’n up, and meet me when the snow melts in the spring for some Shack Track runs!