I just love the heck out of some Zumba.  Apparently, this is abundantly clear to anyone who participates in class with me as, today, as I was leaving the gym, one woman came over, having just sweat next to me for an hour, and said,

I just love your enthusiasm and energy in the class! It really just makes me wanna work even harder!

I said thanks, letting her know that it meant a lot to me knowing I could contribute to the workout.  And I’ll admit, more often than not, I like to take zumba class seriously. When instructors say, “Oh, it’s just about having fun! Don’t worry if you don’t get the steps,” I say, “NAY! If it were PURELY about having fun, I’d be off at some discotheque with some cute skinny jeans and a bandeau under a tank top. Instead, it’s about getting my sweat on to some of my favorite jams, and incorporating pure joy into fitness.”

Ok, I don’t really say that, as I’m likely winded already and toweling sweat off my face and that’s a lot of words to say between water breaks.  But I do take it as seriously as I take any workout. 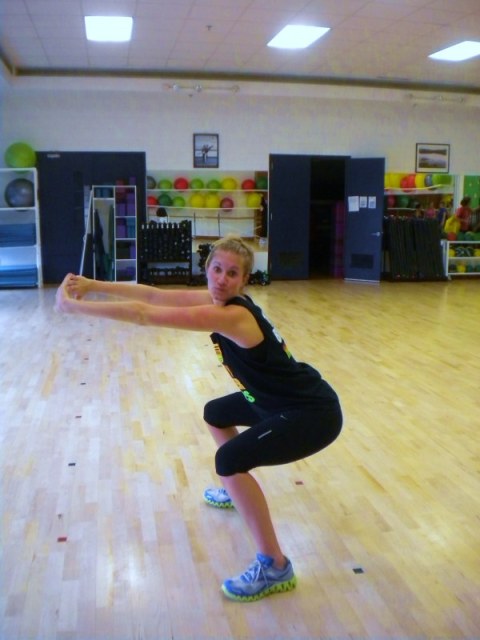 That is to say very seriously.

This class, taught in the beginning of March, was by a instructor that I’ve come to dread.  If I’d never taken a class before, and she was my instructor, I might not know any better.  But I’ve taken dozens, from MANY different instructors, and I’ve become a bit of a snob.  Instructor Red takes things easy. While she occasionally mentions the higher level options, she never demonstrates those options. She also sticks with the most traditional of the traditional Zumba songs. I’m talking almost entirely samba, salsa, and merengue. Sure, there’s the occasional hip hop or contemporary song, but it’s often the slowest of slow, and the moves are repetitive and uninspired.

I find myself having to invent my own “higher level options”, jumping when she steps, lunging when she leans. It’s a challenge to me, not to keep up with the instructor, but to keep making up ways to keep the workout exciting.  It’s a shame, I’m sure she has the best intentions, but she’s the kind of instructor that would be better suited for Zumba Gold. Also, I tend to like it when I can sing along with the music. When every song is in Spanish, I can’t. And that’s the worst.

If you look at the image, too, you can see the deep drops in heart rate. I love a little breather now and then but, when my heart rate dips to 120 and I’m not cooling down… that’s a little bit of a bummer for me. When I only have about an hour to work out, I like to get the most bang for my buck.

I’m pretty sure the initial spike up to 201 was a fluke, but I will say that the blue instructor always starts the class off with a bang. He (yup, it’s a dude!) teaches the most athletic Zumba class I’ve ever attended. There’s jumping, shaking, quick feet, and core work. But despite the variety of exercises, I am sweating the entire time. He probably plays the most “contemporary” music, with a lot less focus on the traditional Latin tunes. I know that’s not maybe the most kosher, but it helps me when I’m drenched and gasping for breath to at least be able to say the words of the songs in my head.  Also, one of his favorite songs to play?

That’s right, the hit song from the Madagascar 2 soundtrack.  Listen to it, and you’ll be able to imagine the booty shaking and thrusting that goes on in this song.  I LOVE it.

It doesn’t hurt that he’s nice to look at, but that’s neither here nor there.

Instructor Yellow is a firecracker. She’s a ray of light every day that I get to work out with her, and she fills the group fitness room with light (that’s why I chose yellow for her.) Mixing traditional Latin music and current songs, she is never afraid to challenge us with a song that doesn’t seem like a “Zumba” song. (Country Girl, anyone?) While there is never truly a “slow” song, she tends to feel the crowd out and throws in a slightly slower paced one every now and then if we’re huffing and puffing.

The thing I like the most about her, though, is she makes the class interactive. She invites the boys to the front of the class every now and then for a particularly booty-shaking-focused jam, she calls people out when they’re really rocking, and she always knows what to say to pump us up for a song. Also, unlike Instructor Blue who has a more athletic, though slightly jerky pace, she has a nicer flow than all the other instructors I’ve worked with in the past. She doesn’t restart songs if we aren’t dancing immediately when it starts (which I think can mess with the flow of the class) and, if she messes up, she always recovers with grace and a chuckle. She just seems at ease all of the time, while simultaneously making the class feel comfortable AND kicking our asses.  It takes a powerful character to accomplish all that at once but, despite being tiny, she packs a wollop!  You can tell if you look at the heart rate chart.  Woo, nelly, no joke!

It doesn’t hurt that her outfits are bright and exciting, making her a flash of color across the stage at the gym.  She’s just the best.  And when you find a Zumba instructor you click with, you just know.

What makes a group instructor particularly great in your opinion?

Even though it’s only Tuesday night, I already feel the weekend peeking around the corner.  Today was a little bit of a breeze, which I just loved. I worked on a different project at work which was both fun and exciting (like that hopeful feeling you get when you first start a year of school as a child, I love that feeling.) And then, I realized through the grapevine that it was, in fact, a very special day.

That day was National Taco Day.

Well, I really didn’t have much of a choice but to celebrate…. 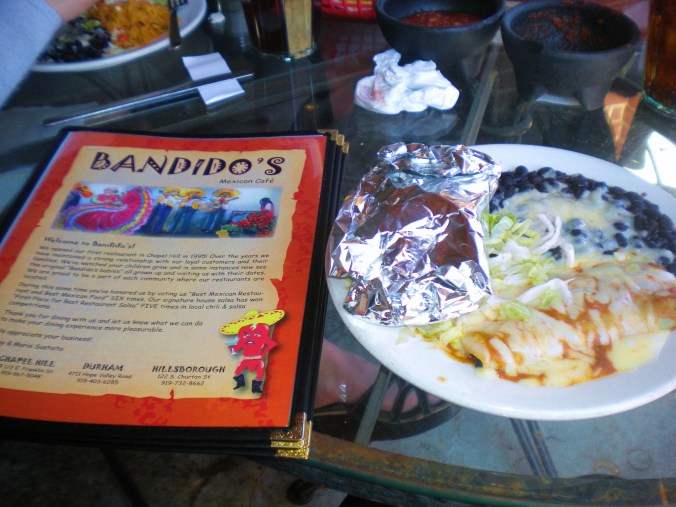 Bandido’s is my favorite Mexican spot of all time.  And, somehow, I managed to be lucky enough to live near two locations for the past 6 years.  We used to frequent the one in Chapel Hill every Thursday, me and my girlfriends Kinsley and Claire, and we called ourselves the Bandido’s babes. And I hadn’t been there since JUNE!  The splurge was totally worth it and included a black bean enchilada, a soft chicken taco (I ate about 2 bites of the tortilla, then just went for the fillings) and a side of black beans. Of course, everything was slathered in cheese and salsa.

In other news, I finally got back to Zumba today! And I was in an even better mood because I felt like I was rocking one of my favorite workout outfits.

In an attempt to show off my brightly colored bra, I also managed to call out the power of skeletor in the form of MY COLLARBONE! 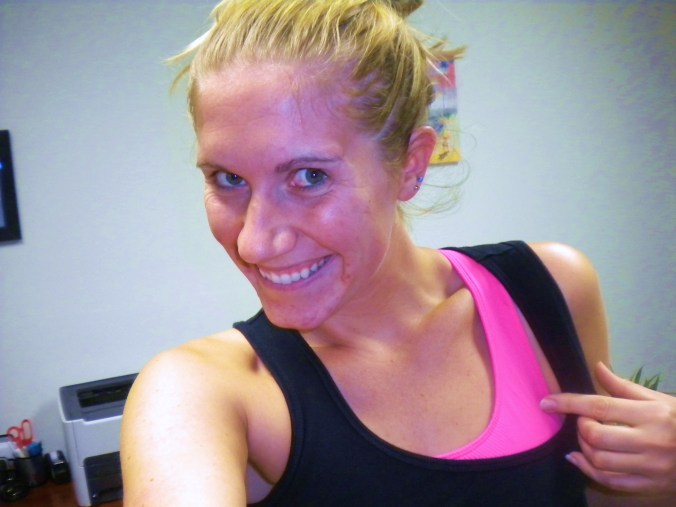 Hey there, crazy collarbone. Thanks for coming out.

Fortunately, the collarbone went back inside shortly after and just in time for Zumba.  While in class, though, I got to thinking about Group Fitness Etiquette.  As a huge fan of group fitness classes (in particular, Les Mills classes, Zumba, and newly, Pure Barre!), I think about this a lot. I’ve been in amazing group fitness classes, and stuck in rooms where I felt like everyone was actively trying to kick me in the face [cough BODYCOMBAT cough]. But I like to think that I’ve picked up some pretty good bits of etiquette.

1. If you’re ever doing a move where you’re kicking or punching, LOOK where you’re going! No one came to the gym looking for a fight.

2. If you don’t know the moves, or choose to do moves different than the ones that the instructor is showing, don’t stand in the front of the class.

3. When taking classes like BodyJam or Zumba as an extremely talented dancer, showing off a little is okay. Re-enacting the hit film, Fame, is not. We get it. You got skills. Take them to a dance studio or some reality show, you’re making us feel bad.

4. Ok, I’ll hand it to some folks. If you’ve got the confidence to rock just a sports bra and shorts, more power to you. But tiny booty shorts and a barely-there braziere might not be the best fit for a group fitness class.  Especially one with lots of bending and stretching [crotch shots. nuff said.]

5. Do unto others. If someone slips and falls, don’t laugh. Help them up, offer assistance if it’s needed, get ice. Don’t just ignore them. There’s nothing like slipping on the ground mid class and almost getting trampled because no one has stopped (sidenote: I’ve done this no less than 3 times).

6. Have fun. It’s so sad to see folks who look miserable, so if there is anything that can get you hyped up, it’s probably some exercise.  Exercise gives you endorphins. Endorphins make you happy. Happy people just don’t shoot their husbands (or anyone else.)

What are your favorite bits and pieces of group fitness etiquette?

Or… if you’re a runner, what’re some pieces of runners etiquette?