This post is very near and dear to my heart.

On Tuesday evening, I went to my third Pure Barre class (to see what I thought about my first one, check out my Pure Barre Breakdown).  As I mentioned before, the class may not be means for the tall people, the people who aren’t flexible, or the people without rock hard abs. But it’s a workout to kick your butt. You’ll leave drenched in sweat (or dripping actively on the barre all throughout. It takes all kinds, right?)

Something that I couldn’t help but notice, though, is it’s also a workout for the fashionistas. When you head over to the Pure Barre website, you’ll be treated to images like this one:

And they look so happy, right? (source is Pure Barre site)

Not surprisingly, when I attended my first class, everyone that joined me in the class was wearing…. well, they were wearing this. And I don’t just mean the compression black leggings, the signature purebarre socks and the slim-fitting tank tops. I mean the stone-cold looks on their faces as they tucked their hips, squeezed their fannies, and extended their elbows. I felt like the first class, as well as the one I took on Tuesday, was an hour long photo shoot that we were all supposed to have dressed for.  For comfort reasons, I wore this:

What? Not appropriate for the class? You all don't want celebratory Irish kisses as you squeeze a small ball between your thighs?

I caught myself huffing, puffing, dripping, and grunting, as I do in all group fitness classes. I’ve spoken before on group fitness etiquette and, as a huge fan of group fitness classes, I wanted to write an ode, a thank you of sorts. Not to the classes themselves, but to the people who take them. The people who take them that may not be wearing the right outfit, the folks who give me high fives when I run past them, the ones who can’t kick up to their heads like a rockette and the ones who haven’t the foggiest idea what this whole “rhythm” is.

The one thing I noticed in fitness classes, namely Zumba, BodyJam, Sh’Bam or any class related to rhythm and matching your bodies to the sweet beats blasting from the sound system, is that I have no dancing skills in my body. While other people were trying out contemporary jazz classes at their local dance studios, I spent my time doing lunge suicides and practicing soccer kicks [to no avail, as I sucked and continue to suck at soccer].

I’m not saying that this makes me unique.

But it does make my “dancing” look a lot less like the moves on Dancing with the Stars and a lot more like a jerky, athletic seizure.

Dance move or volleyball block? Now you don't have to choose.

So here’s to us, ladies and gents. The ones who work it out in class despite the fact that our hips do, in fact, lie. They lie and pretend they’re Shakira’s hips and, for a few brief minutes, we can pretend they are.

Here’s to the silent awkward majority. When we go to BodyJam or Sh’Bam and they ask us to arabesque, our poses look something like this:

Is this what you meant? No? Well, I'll just keep doing it.

We won’t be able to do a 480 spin midair while we’re perspiring and rocking out to some new Pitbull remix, but we will work just as hard as any of you who can. When instructors ask me to pony step, chances are they assume that my kicking is an attempt at squishing some spider on the gym floor. 99% of the time, it’s not.

There was the great spider invasion of the YMCA Zumbathon Against Prostate Cancer in 2004, but we’ll forget that ever happened.

As a big thank you to all my fellow awkward weirdos out there, I want to promise you something.  As many overpriced exercise classes I go to, I will always dress in part-neon colors, part inappropriate shirts. They might even have a picture of me on them. 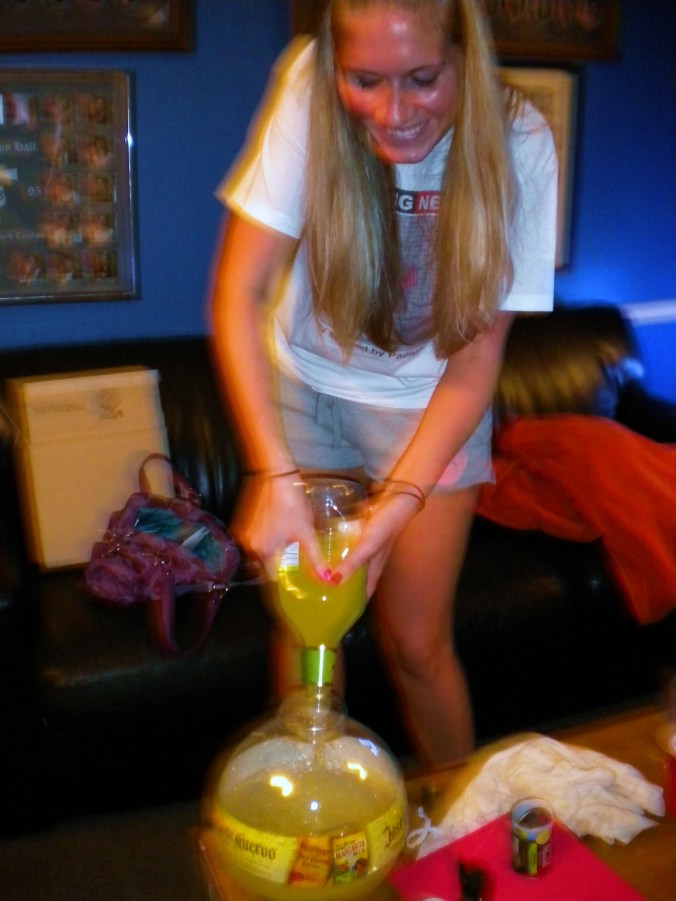 Ok, it's hard to tell, but this is ACTUALLY a shirt I own with a picture of myself on it.

If you feel like flailing like a lunatic in a class, I won’t make fun of you. I will be right there, matching you flail for flail. Whatever.  We’re getting our fitness on, and we’re having a blast doing it.

I just wanted to say this for the sake of anyone who might be nervous to go to their first group fitness class. Every single person in that class was a newbie at one point, and if you’re not sure about it, just do it! Get out there, flail that body, shake it like a polaroid picture, and maybe one day our paths will cross.

Chances are, though, it’ll be as I high kick you in the face in the middle of BodyJam.

I apologize in advance, I still don’t know how to control these long legs of mine.

15 thoughts on “Ode to the Awkward”