So the main reason I decided on the trip and itinerary we chose for Costa Rica was for the adventure of it all.  I saw the itinerary on Groupon and was immediately hooked on the idea.  Canyoneering, horseback riding, safari tour, hot springs, a waterfall visit, AND white water rafting?

See, the thing is, the guides from Costa Rica Descents were, for the most part, great. They were knowledgeable, they were skilled in the ways of the river, and they were mostly supportive.  Mostly.

When we got to the jump-off for the whitewater rafting trip, we were excited.  We were ready to rock!

To the right of that picture is Alex (I think his name was Alex, that’s what I’ll be calling him). He was our lead guide on the adventure and, as luck would have it, chose Rachel and I to be his boat partners.

That’s right. Just the three of us. One raft. Let’s do it. 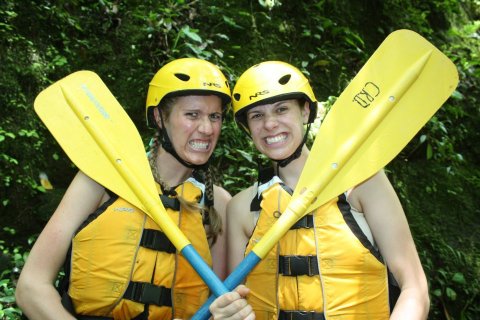 After a brief (10-15 minutes) introduction to whitewater rafting (TOTALLY sufficient for class 3-4 rapids in a boat of firsttimers, right?), we hit the river rowing. Or paddling. Or whatever.

For the record, I consider myself somewhat athletic.  That being said…. I’m not very coordinated.  Oh well.

At first rapid, I thought I was doing pretty well.

We got this. Right?

We were jammed in the front of that boat, my legs sticking out, but I still felt like we had a grasp of what our guide was saying.

He, on the other hand, did not think so.

You can’t tell in this shot, but he’s judging me.

He started to tell me that, in my paddling, I was being a chicken. He said that if I didn’t start doing it right, I was really going to screw us up.  That being said, I was not really told what exactly I needed to change. Calling me a “chicken” and telling me to stop being scared does NOT equal guidance.

Now, those of you who know me might be aware of my extreme sensitivity.  In this post on all the junk I hate about myself, I talked about how I cry over EVERYTHING.

Being told that I’m a chicken who’s lousy at rafting and likely going to kill my best friend and a total stranger falls under “everything”.

I sort of LOOK like I’m doing it right, right?

Anyway, within minutes of hitting the water, I was already crying.  That’s right, the river guide made me cry and feel like a loser.  Awesome vacation story, right?  Don’t worry, it gets better.

Rachel suggested to not worry about him, so I did my best to put a brave face on.  I could do this.

Grinning and bearing it 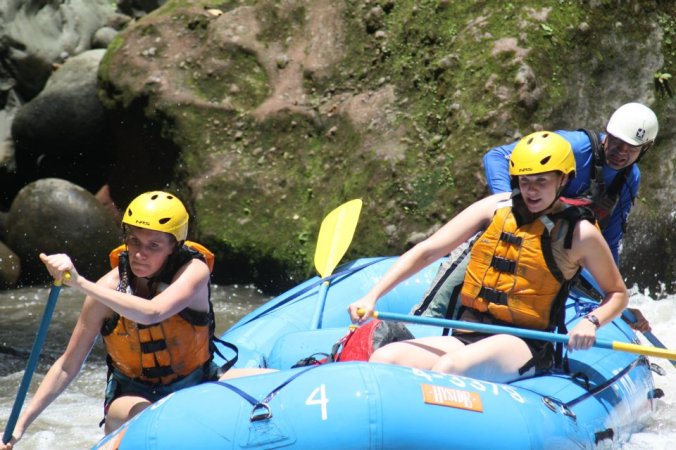 And then, we started approaching it.  The Class 4 rapid we’d heard so much about (sarcasm, he hadn’t told us anything about it).

I felt like I was slipping. We hit the steepest drop and…. well.  A picture is worth a thousand words, right? Here are a few for you. 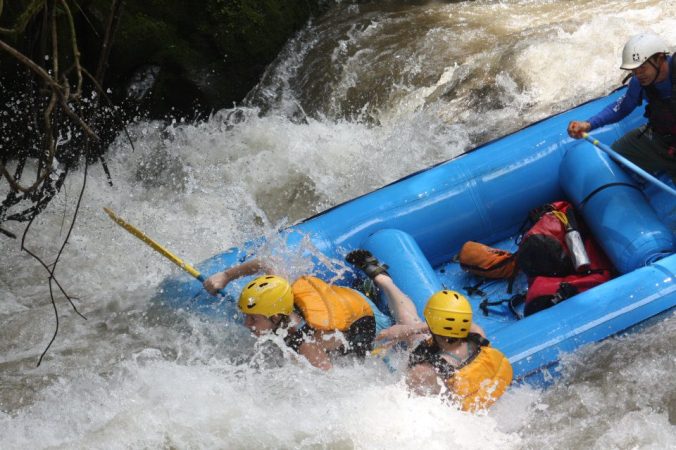 I held onto that paddle like it could do me any good. HA!

And in we went.

Don’t worry, I was still holding onto my paddle (wtf?) 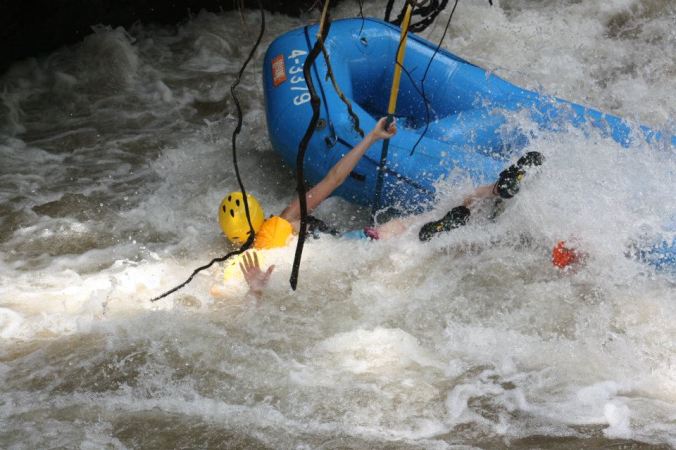 Cue: Only time I’ve ever truly thought to myself “Hey, you could die. Right here, right now.” 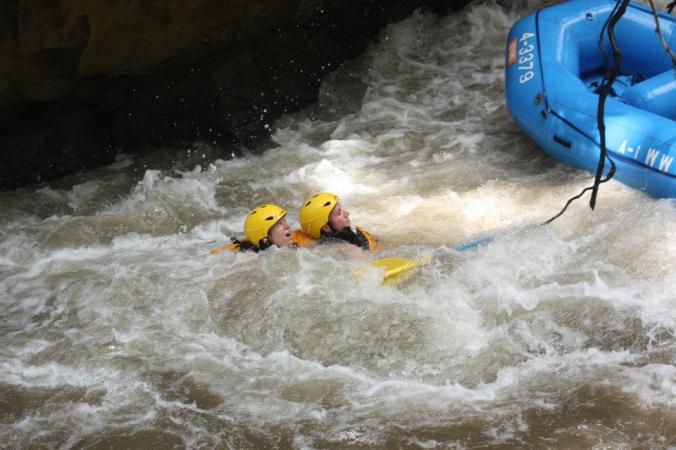 Luckily, there were kayaks along for the ride to help us if we got in a tight spot.

Oh, wait. The water was too rough even for the KAYAKS!

I didn’t drown, don’t worry (though, if I did, I think ghost-blogging would be a sick career move). But I DID inhale quite a bit of river water (a little piece of Costa Rica to take home with me?) and I did end up with a NASTY bruise on my thigh, a cut on my ankle, a number of smaller scrapes, fear filling my heart, and a deep, deep wound to my pride.  As if the guide’s constant berating of my rafting skills wasn’t enough, I had to go and prove him right by almost killing us.

Anyway, it was absolutely terrifying.  You’d attempt to breathe and, instead of air, you’d suck a giant gulp of water. You’d try to follow your guide’s instructions and get your legs in front of you, then you’d feel a rock drag your leg underneath your body, twist you in a way you never thought possible, and panic as you were turned around, spun by a combination of water and moss-covered stones.

Speaking of which, I’d like to give a big shout out to MOSS, my main man, which probably prevented me from sustaining any more injuries than the ones I did. It was like a tiny furry yoga mat on all the giant boulders, buffering my buffeting.  Finally, the other boat caught up to us and I was hoisted out of the water by my trusty lifejacket.  At this point, I was uncontrollably crying my eyes out trying to remind myself that I wasn’t dead.

But we made it out.  And, though there were some close calls… 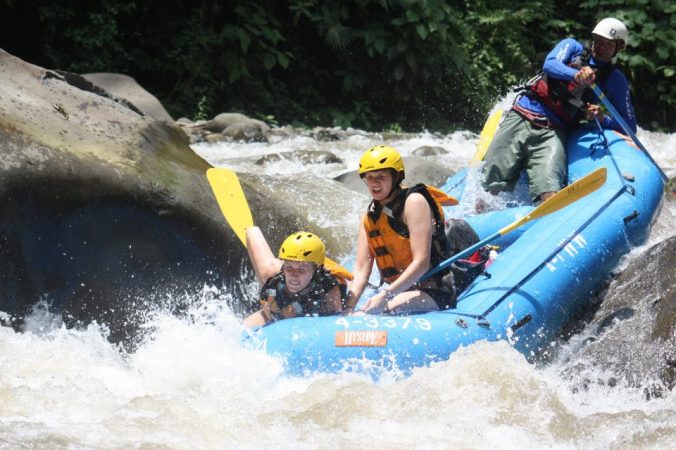 But we stayed in the boat for the rest of the trip.  Despite the horror, I ended the day with a big smile on my face. 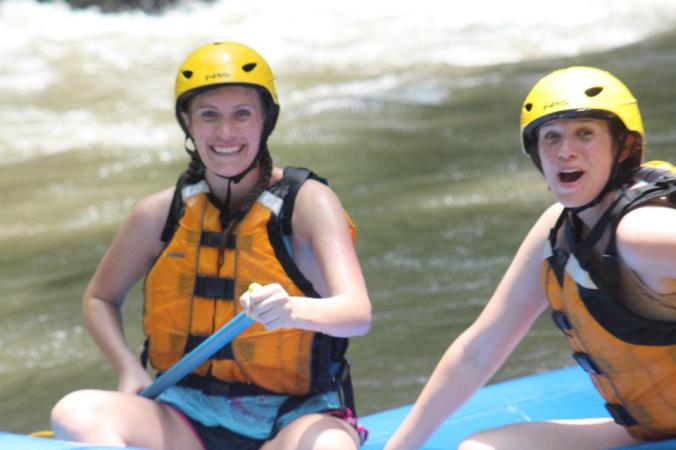 You’d never know what had happened earlier…  But Rachel knows.

It was probably the knowledge that a heaping plate of rice, beans, porkchops, and yucca chips were waiting for me around the corner.

How about you, any near-death experiences in your life?