Ah. Ok. It’s Friday, 4:51 pm EST and I’m (blissfully) in Ocean City, NJ, my favorite place on the planet. And after scampering from Costa Rica to Pennsylvania (for a quick nap) then to Durham for a hot second (or four days), I headed even further South for a little vacation with the beau and his family. Though we’ve been dating for over four years, I have just recently met a number of Ryan’s relatives (who reside in exotic Texas, thus mostly out of my regular travel grasp) in Destin, Florida. And Tropical Storm Debby had the NERVE to join me on my vacation.  Luckily, she migrated after a little more than a day, so I still nabbed my fair share of sun and sand (too much on my backside I think…. I’m basically the Coppertone Girl right now.)

ANYWHO, I know it’s not Sunday. But since, when you’re funemployed, days don’t make any sense (and I haven’t produced a Six Pack Sunday in AGES), let’s bring it back for old time’s sake.

Perhaps you’ve flown US Airways…. But have you EVER had the pleasure of flying US Airways Express?  Because (and correct me if I’m wrong), I’m pretty sure they’re the same airline, only they use toy airplanes meant for children to play with instead of real airplanes to get passengers from one destination to the next.

Here’s an awesome shot of my head pressed against the ceiling (roof?) as I uncomfortably await my deplaning. 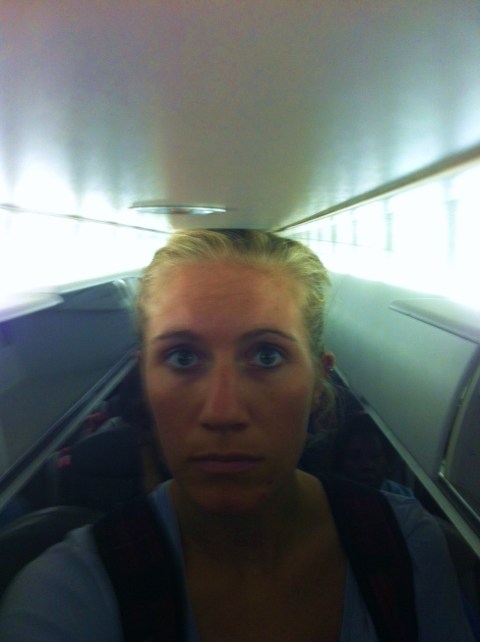 Normally, being 6’1″ is the JAM. In the case of the tiny airplanes… less so.

Double the rainbow, double my joy

Only rainbows after rain, right?

The Donut Hole is a quaint little spot (or two, I think I saw a second location) in Destin, Florida that’s known for donuts and serving breakfast foods well into the evening.  But I think what I’ll remember best about it was their “Diet” Plate. 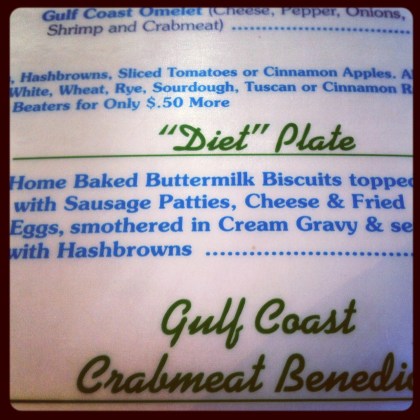 Luckily, I went with a much healthier option.  Giant slices of homemade french toast filled with walnuts, raisins, and drowned in syrup.

When there are rainy days at the beach, there’s not much to do.

We may all have had the same color polish on by the end of that first day. Lucky the storm didn’t last much longer, or the boys may have gotten pedis.  And maybe the puppy.

5. The Ultimate Spot for a Hermit

Ah, oysters, ambrosia of the sea.  And, apparently, a not-so-great spot for a Hermit Crab to try and make a home.

That’s right, we found this little nugget inside of an oyster we got during Happy Hour at Mitchell’s Seafood Market. Luckily, it was spotted BEFORE anyone swallowed it.  Apparently this hermit wanted the ultimate getaway.

6. Do Not Adjust the Settings on Your Computer

Is that our love burning, or just our skin?

Both Ryan and I ended up about the shade of your run-of-the-mill boiled lobster.  That Florida sun is no joke.

And now, here I am. Another beach, only this one’s the shore.

It’s good to be home.

Weirdest thing you’ve ever found in your food?