It might seem, if you’ve been reading semi-lately, that all I do is eat and drink beer. I promise, that’s not true.

SOMETIMES…. I run and drink beer. Well, not really all that often, but there’s definitely those times where I exercise. It’s been less, but now that I went and graduated, I can’t wait to get back into a routine. But, just to make sure that I ease into the transition…. I figured this might help.

Tap n’ Run is a ridiculous “race”, a 4k (I’m sure all my running friends are scoffing at me…) with four “chug stations” along the way.  I pretty much can’t stand running. I’m not terribly good at it.

Know what I’m great at, though?

Especially with the help of three girlfriends, four feather boas, and a lot of suspenders.

After a delicious brunch of huevos rancheros made by yours truly at the home of my buddy Susan, complete with mimosas and margaritas, we were fueled up and ready for action. Team Crops n’ Hops!

After a few warm-up beers at Xfinity Live, hosts of Philly’s Tap n’ Run, and a celebratory “start” chug, we were off (those were the beer-lerinas in front of us. so much pink….)

Unfortunately for the sake of my fellow runners, they did NOT use the facilities before we hit the road, and within less than half a mile, had to hit the porta-potties. Sure, we got a little behind, but it ACTUALLY didn’t matter, because before we knew it, we were at the second chug station.

Chug-a-LUG and time for another lap around the stadium. I don’t really know, I’m not an expert at that little stadium area. Best part of this whole “chug” thing was the fact that the beer we were chugging was NOT the Heady Toppers and Russian Rivers that I had been drinking for the previous week.

Coors Light! Blue Moon! They even have some gluten free stuff, if you’re into that kinda thing….

And then, before I knew it, it was time to push through the finish line to the dulcet tones of Gangam Style. 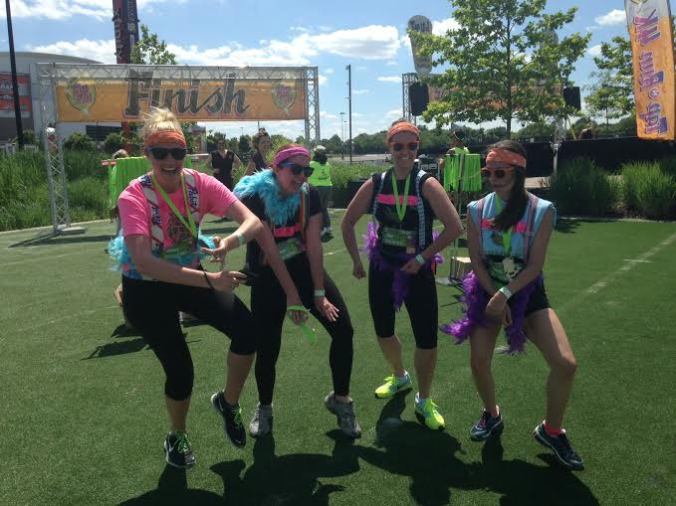 Oh yeah, we also got medals.

I would NOT say that Tap n’ Run is a race for people trying to boost their PRs. It’s not an experience that is going to leave you drenched in sweat thinking “wow, running gives you endorphins! LET’S DO A MARATHON!” It IS an experience that leaves you so happy  to have friends with extra hot pink duct tape and value your years of all those years of college. And who couldn’t use a nice 4k in the summer complete with some chug stations and a lot of feather boas along the way?