…That’s how the phrase goes, right?

UGH. Day two of being home sick (technically day three of feeling pretty rough) and I’ve got a doctor’s appointment at 2pm. In the meantime, though, I’ve made some serious progress.

I took a shower!

I’ve finished approximately half of my bottle of orange juice as part of my Get Better Cocktail from yesterday.

I changed out of my sweatshirt (and into a bathrobe).

I actually ate very delicious and (fairly) healthy meals, so at least I’ve still got my appetite.

Thanks to tips from Twitter friends, I coated my pizza stone in corn meal.

Want a little ‘za with that cornmeal?

The cornmeal worked a charm! 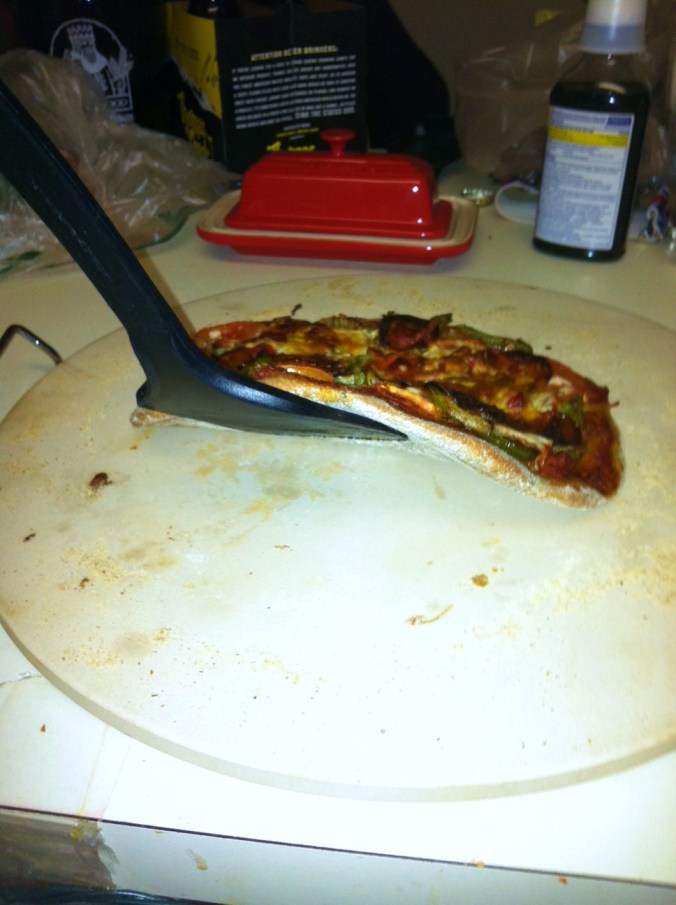 No sticking?! No problem.

The last time I used my pizza stone, about 40% of the crust stuck to the stone. Didn’t really taste like pizza, as much as a dust of crust with some toppings.  This was much more pizza-like.

I’ve used the whole wheat pizza dough from Harris Teeter many times in the past and this was my first time trying the Trader Joe’s brand. Overall, I’d say it was a little chewier but MUCH easier to spread on the stone than the Harris Teeter kind AND it’s always $1.07 per ball (I’ve even seen it for $0.99 before!) Bargain, considering that makes up two pizzas for single-girl-living ME!

Thanks to the glory of HBO Go (free if you’re an HBO subscriber), I can watch shows like True Blood, Boardwalk Empire, Summer Heights High, Angry Boys, etc from the comfort of my computer, my phone, or my Nook tablet. Admittedly, I can’t get the actual App on the Nook tablet BUT here’s a fun little hack. Use your Nook browser in Desktop mode, and voila, it’s just like using it on your computer.  Ah, technology…

Having worked on the OCNJ boardwalk for several years, Atlantic City during prohibition is basically the exact same as Ocean City, America’s Greatest Family Resort, during the mid-2000s.

I have decided that my next future major life event will be in the theme of Boardwalk Empire, because clearly, I would make a gorgeous flapper. I could ask Cat for tips.

Now, since I just slammed some more NyQuil, it’s time to go back to sleep, making sure I don’t drone off about the perks of prohibition or how much fun highway robbery looks.

[the craziness has kicked in.]

What would you do on a sick day?

13 thoughts on “Starve a Cold, Castrate the Flu”