Ah, the morning after St. Patrick’s Day. The birds are chirping (which I can’t stand), the green food coloring is starting to fade off my hands, and the desire to make something productive out of my day is doing battle with the wish to never leave this couch.  It’s been a busy week with a quick trip home to Pennsylvania and little to no time to blog.  But now, on a foggy Sunday, there’s no better time to whip up a Six Pack Sunday post!

Fun tip I learned last year. If you wanna drink green beer on St. Patty’s Day, but don’t wanna chug the swill that most bars are shelling out with green in them, bring your own blue food coloring. A drop or two in a golden ale or lager, and VOILA you’ve got a beautiful green brew without having to force down warmish Natty Light that’s neon green.  A tasty Harp Lager in Raleigh’s Moore Square was just what I needed on the sunniest St. Patty’s Day in recent history!

2. Might as well fact it, you’re addicted to Judd 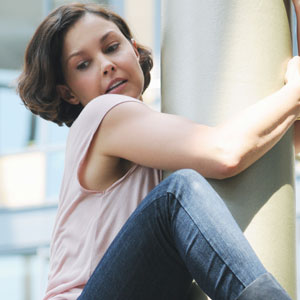 Is anyone else watching Missing? I have only just started, but I already know I’m a fan. With my luck, this probably means the show will be canceled in less than a season, but fingers crossed other folks get in on this trend.  I sense it’s a similar idea as the film, Taken, which is pretty much my favorite action film of all time.  And it has ASHLEY FRIGGIN JUDD as the lead!  Ever since watching Double Jeopardy with my mom as a little one, she’s been a favorite leading lady, but I haven’t seen her in anything too exciting since High Crimes.  I think this type of role (ex-CIA, serious badass mother trying to find her son who was lost or taken in Rome!) is meant for her.  Knock on wood that my notorious bad luck with new shows won’t rub off on this one.

Contest is over BUT thanks to y’all who voted!

Here’s a hilarious picture/caption of Tyler Zeller, instead! 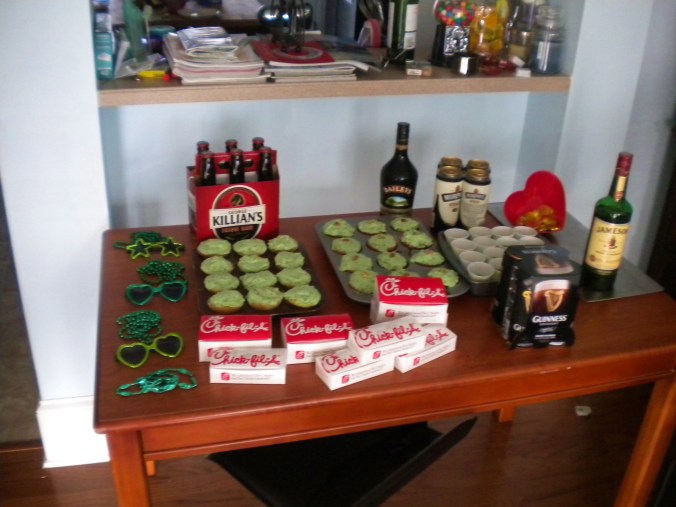 This is most of the tastiness that we had for our St. Patrick’s Day morning party at my friend, Andrew’s house. Since I’m still going strong on the Pescatarian Lent, I brought a French toast casserole to deal with not enjoying the tasty Chick-fil-A biscuits.  I also whipped up some pistachio cupcakes inspired by the most delicious one I enjoyed from Glen Mills’ new Whole Foods!

I wish all brunches came with Guinness.

5. Seafood at a Steakhouse

I promised myself that I’d never be “that person” that goes to a steakhouse and doesn’t order the steak.  But when your mom mentions that all she wants for her special birthday dinner is Alaskan King Crab, you make it happen, no matter where you’ve gotta go.

Luckily, we found them at Sullivan’s Steakhouse in Wilmington, DE.  Mom got her Alaskan King Crab and I was in for a treat of my own.

My dinner was total perfection.

Pan-seared mahi mahi over sauteed spinach with “crab-stuffed shrimp” (which basically translated to butterflied shrimp surrounded by tender crab meat.  I couldn’t even finish it (though I only left one crab-stuffed shrimp) but it definitely gave me faith in steakhouse seafood.  I’m a believer. 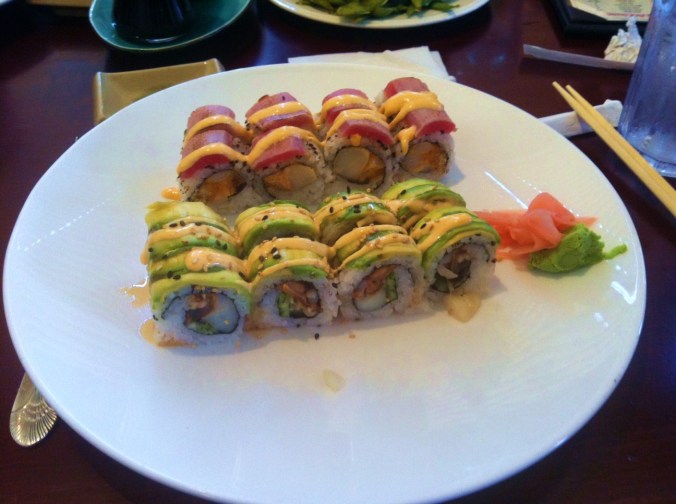 Get inside of me.

After an early flight on Thursday morning, following a fantastic (albeit brief) visit home, the last thing I wanted was to go home and cook for lunch.  But it was my coworkers last day in the office, and I also had to celebrate a little bit.  We got sushi at Shiki in Durham and it was fantastic! Scallops, tuna, avocado, I totally splurged and got some special rolls I’d never tried before.

What was I celebrating?

I got into grad school!!

I applied to four programs and, though I’m still waiting to hear back from three, I was accepted into one of my top choices!! I’ll definitely be moving back to Pennsylvania sometime this summer because next year, though I don’t know where yet, I’ll be a student again!!

I can’t wait for this next step in my life, and to move back to the North. There’s a lot left to do in NC before I go (Triangle Bucket List, anyone?) but it’s a great feeling, like a weight off my shoulders, knowing there’s at least one program that wants me as much as I want them!!

I may actually go and celebrate a little more with a trip to the mall/bookstore.

Again, I’d deeply appreciate any “likes” on my Facebook photo!

Did you make any tasty green treats for the holiday?